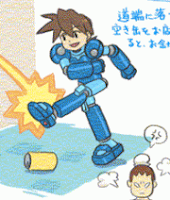 It took a little while, but the Devroom has finally revealed the winners of the Legends 3 easter-egg event. The event tasked Devroom users to design some kind of hidden trick or gag that would appear in Temeo Town. This gag would be executed specifically by kicking, jumping, and/or grabbing and throwing an object.

Out of a thousand entries, Capcom chose a grand total of seven entries gimmicks from both the English and Japanese Devrooms:

You can read up on all the winners, runner ups and honorable mentions at the Devroom. There's A LOT, but each deserves a read.

Congratulations to all the winners! If you didn't win, don't fret; there's always another Devroom contest around the corner!
Posted by Protodude at 10:49 PM