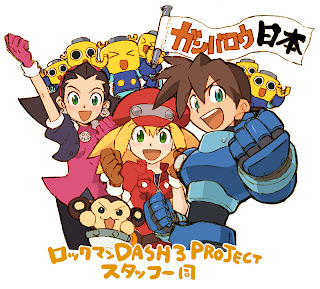 While there's no mention of whether or not the game has been green-lit during the hiatus, Kitabayashi declares the game's development will continue. The dev team's renewed spirits apparently come from a desire to make a game for the people. According to Kitabayashi, the will to make something enjoyable, something fun for those affected by the recent disasters, is fueling the game's production. To ensure this happens, the dev team is pouring everything they've got into DASH 3.

Complementing the Devroom's return, Kitabayashi shared the above image in support of the earthquake recovery efforts featuring the likes of Rock Volnutt, Data, Roll (with her fancy new outfit), Tron and Servbots. Certainly a sight for sore eyes, if I do say so myself.

Worry not about DASH 3's production. This one's going the distance.