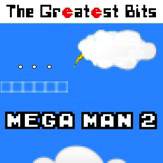 Here's something for you Mega Man audiophiles. Artist The Greatest Bits contacted me earlier today to let me know about his latest album themed solely after Mega Man 2. Described as a "chiptune crossover", each song from the game has been remixed, combining 8-bit retro-style sounds with "real instruments of the 21st century."

The result are pretty satisfying, if I do say so myself. Have a listen to the soundtrack yourself: samples of the soundtrack can be heard directly from The Greatest Bits official site.

Chiptune fans will be all over this one, but I must admit that some of the songs could have used a little more of a "kick" to stand out above the ever-growing crowd of MM2 remixes. Nevertheless, it's a great compilation with a lot of heart.

Like what you hear? You can purchase the full album (or individual songs) directly from iTunes, Amazon or CD Baby. Enjoy!

Thanks for the heads up, The Greatest Bits!
Posted by Protodude at 4:51 PM