Speaking with a Jazwares rep. early today, I learned the company has a few interesting Mega Man products coming down the pike.  In addition to the urban vinyl figures (due in early 2010), the company plans on re-releasing their popular 6'' Retro Roto series in a four-pack box set.  BigBadToyStore has already begun accepting pre-orders: 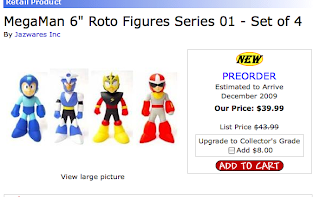 According to Jazwares, the set is exclusive to online retailers, and won't be sold in-stores.

Estimated arrival is in December, with a follow up box set consisting of "wave 2 figures" in the Spring of 2010.  Jazwares did not specify on what will make up the "wave 2" line,  however I can't help but think that this would be a grand opportunity to finally release the much delayed Heat Man, Wood Man and Ice Man roto figures.