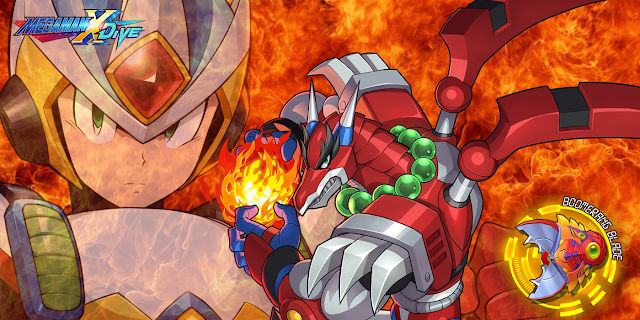 In the original Taiwan version of Rockman X DiVE, Magma Dragoon was added as a boss for the tenth story mode chapter. He later became available to fight in other game modes. With the Global Version of the game running on its own schedule, however, players won't have to wait months and months to play as the former leader of the Maverick Hunter 14th special unit.

Magma Dragoon is equipped with his trademark Hadoken and Rising Fire attacks. He's packed with powerful passive skills like Explosive Martial Artist and Burning Spirt. The later can actually be enhanced with the Magma Dragoon card too. He will be sharing the gacha banner with the S rank buster Boomerang Blade starting this Wednesday in the NA server.

When it comes to the EU/LATAM server, this week sees the arrival of the gacha banner with Second Armor X and the Essence of the Abyss spray. Nothing to talk about as both are in the game already.

While we wait for the Christmas event to start, don't forget to collect all the Christmas activation cards to get free pulls in RiCO's Christmas Capsule.

Keep you eyes peeled to the login rewards as they have been upped!