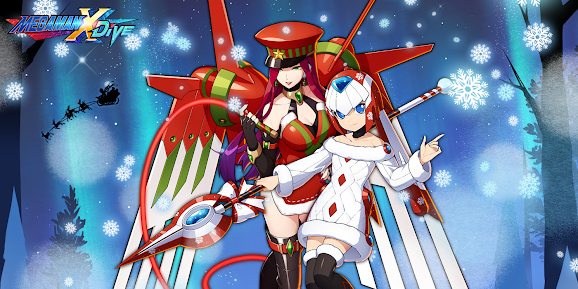 The Christmas event kicked off in Rockman X DiVE last week. This week, it's the Global Version's turn to celebrate its first Christmas holiday-themed event ever. Better yet, a myriad of new content and systems are available this week too.

The "Merry Christmas!" event stage goes live this Wednesday on all servers, granting players the opportunity to get Bit for free after reaching the required points. Further, you'll be able to get the "Merry Christmas" card which carries the skill Divine Night Blessing. It decreases damage received by 40% when your HP is below 50%.

In terms of the characters, the main highlight is Christmas Leviathan. Her active skills are Ice Javelin and Ice Ring. Her passive skills will provide means to slow down the target, recover HP, and increase the number of Ice Crystals when using the Ice Ring skill.

Bit active skills are Forward Slash and Bind Ring. His passive skills will reduce the preparation time, flight speed and add a tracking effect of his active skill Bind Ring. Lastly, when causing immobile status or hitting a target that is immobile, your movement speed will increase by 30% thanks to the Nightmare Police passive skill.

This week brings the "skin store" to the game. The following skins will be available from the get-go:

Mega Man X DiVE is making a big leap this week with the introduction of the DNA Code system, the Guild system and new story mode chapters. There's also a huge amount of new levels for Jakob, interface and gallery upgrades and various incentives for new players.

The LATAM server has been relishing in this since Monday. The NA an EU servers are set to follow suit on Wednesday.

There is an issue with this update and controllers won't work but NebulaJoy is working to fix it as soon as possible.

For now, only a select pool of characters can access their respective fixed and recombined DNA. Additional characters will be added in the future.
Although the development team are providing us with a little bit of the new consumables required to use the DNA Code system, the main juice comes from character memories. I hope you have a good reserve of those for your favorite characters!
If you want to read all the details about how the system works, you can do so here !

In terms of the Guild System to create or join a guild, players need to be at least level 30. In order to create your own guild, you will have to pay 500 EM. From that point on you can invite up to 9 players, set a custom message or set conditions that need to be met in order to join the guild. (example: a "power requirement") Other players can freely join your guild upon the guild leader acceptance, too.
By donating Zenny, guild members can obtain rewards such as single cards, card packs, skill points, EM or weapon boxes among other things. The daily goals that will dictate the amount of rewards are 1, 100k, 400k and 1000k Zenny.
From time to time a guild boss will be available. Guild members will fight the boss in the same fashion as a typical Raidboss. What's more, players can gain buffs by defeating lesser bosses that appear alongside the main boss.
The first guild boss is Wolf Sigma with Chill Penguin and Goliath as the lesser bosses.
And that's all for this year! 2022 will start strong with the Auspicious of the New Year event stage and New Year Cinnamon!
Disclaimer: The skin prices in this article has been provided by NebulaJoy, any last minute change is outside our control or responsibility.
Posted by Reploid21XX at 6:01 AM