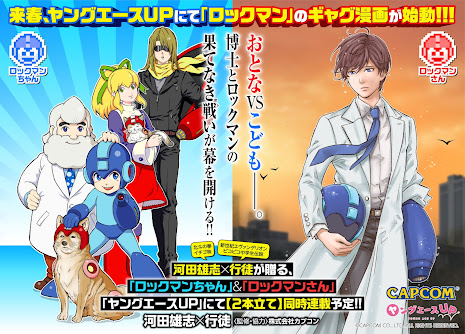 First, we have two brand-new manga. Rockman-chan is a humorous, parody manga starring an innocent Blue Bomber as he carries out the whims of Dr. Light. Dr. Light's missions for our hero, however, are anything but a cake walk.

The second manga is called Rockman-san. It follows the misadventures of a grown-up Mega Man as he deals with the tumultuous demands of an adult world.

Both manga will launch exclusively in Japan on Young Ace UP this coming Spring. English adaptations have not been announced. So... do look forward to our inevitable fan-translations.

The third announcement is a brand-new Capcom tribute album called Captune ONE. It will feature a new arranged pieces from the Mega Man series, such as Running Through The Cyber World” from Mega Man Battle Network, "Wily Stage 1" from MM2 and “Esperanto” from Mega Man Zero 4.

Posted by Protodude at 7:22 AM