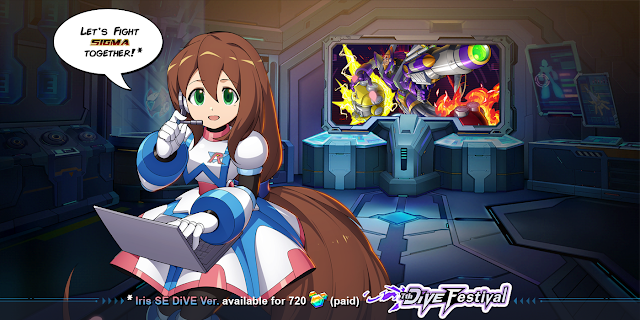 The last DiVE Festival of the year is here and it's packed. We have the second playable boss, the third Raid Boss event, and a new skin. Find all the details after the break!

Omega was the boss for the ZX Series event back in September. And now, he's become a playable character right before the Christmas event. The banner is available now through December 16 at 15:59 (UTC+8). Now let's check out his skills!

Deal damage equal to 41.12% of ATK to targets in range. When charged, the skill will become a more powerful version and when reaching maximum charge, it will cause 7.2X damage and summon boulders to fall on targets along its path.

Destructive Weapon: When you use a weapon or hit a target with your skill, there's a chance to render the target immobile.

Arc Blade: When performing aerial attack with a melee weapon, unleash multiple sword waves to damage the target. This effect can only be triggered once more after 3 second cooldown.

God of Destruction: When hitting an immobile target, damage is increased by 20%, with 30% chance to trigger Destructive Weapon.

The 3rd Raid Boss Event is already live and will last until December 15 at 22:00 (UTC+8).
Just like previously, this mode will call for players in the same server to work together to defeat a mighty boss. In this case it's "Sigma [X4 - 3rd form]". All players have equal combat power but the total amount of stars of their characters and weapons will be converted into attack buffs, allowing them to deal more damage to the boss. On top of this, the skills you have unlocked won't suffer any restriction like combat power does.

Each day you'll have 5 chances to challenge the raid boss, with more opportunities that can be bought using EM. In total you can buy five extra tries; the first three cost 20 EM each, the fourth try cost 50 EM and the last one 100 M.
These are the character and weapons that will dealt extra damage to Sigma.
Damage dealt +40%
Damage dealt +20%
Damage dealt +10% 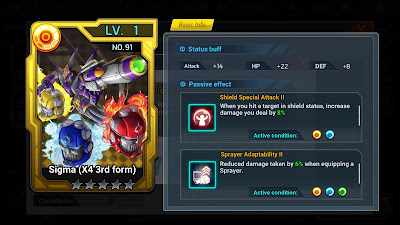 The main attraction when it comes to the rewards of the third Raid Boss event are memories of Super Mega Man, Napalm's Head and the new card: Sigma (X4 3rd form). On top of that the usual rewards, EM, Proficient Memory Cards, Card Packs and so on.
In addition to these reward, there is another event running parallel. When you reach a set amount of contribution points, you will get more rewards that will be delivered to your in-game mailbox before December 23 at 23:59 (UTC +8).
This goals are very easy so you will most likely reach them the first day you play.

Iris "Soul Eraser" Skin is now available at discounted price for 720 EM (paid) until December 16 15:59 (UTC+8). The regular price is 960 EM (paid).
Yes, you read that right. This is the first skin that has to be bought with paid EM,  you have to use your credit card to purchase it. The price in real money is around 20€ or $24, varying slightly depending on what EM packs you buy.
Now, if this doesn't look very appealing to you, perhaps it will be to Japanese players because they can purchase the skin for 1200 EM (not Paid). Why the double standard? If I have to guess, it's most likely because the game just launched in Japan and they want to go easy on them. Still, I will love to read your opinions in the comments!

The second part of the Operation X'mas Present is live from today through December 16 at 15:59 (UTC+8). Week 2 of the event has a different set of missions to complete, you will have to complete missions such as "complete Race Mode 8 times", "complete Jakob Elevator (hard) 5 times" and "defeat 1000 Mavericks" to get rewards such us "Christmas Giftboxes", "Christmas Activation Cards" and "Card Packs".

The "Hunter Token Lucky Roulette" is available from today and until December 15 at 23:59 (UTC+8). You can claim up to 300 tokens daily and one spin cost 50 tokens. Works as it did in the past and the main attraction is the chance to get 50 EM and 300 EM. Good luck!
During the duration of the Festival players will get an "Attack Type Hunter Capsule Starter x1" every day to activate the Attack Type Hunter Capsule. And lastly, you can check the new items added to the store here.
The next big event will be the Christmas event. Let us know your hopes in the comments!
Posted by Reploid21XX at 11:02 AM