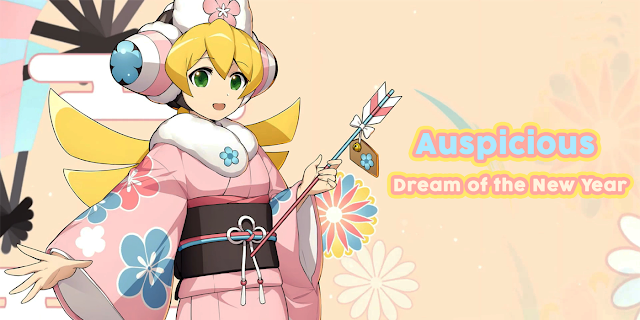 A New Year event with a new stage, a new character, a new musical remix, and a new boss is coming next week to Rockman X DiVE. If you weren't already busy playing the "Merry Christmas!" event stage, well, you'll be busy now two concurrent events. Find all the details after the break!

The New Year event limited character, New Year Cinnamon, and event stage Auspicious of the New Year will be live next Wednesday through January 13 at 15:59 (UTC +8).
The stage is designed around three topics: Eggplant, Fujisan and hawk. The most interesting being hawk as it represents a new version of Storm Eagle.
New Year Cinnamon's active skills are Penalty Game which causes blind status to targets after being hit, and Jeu de Volant which sends a shuttlecock to damage the target. Her game is all about inflicting blind status and gaining random buffs with the appropriate skill card and passive skills unlocked.
Maintenance takes place on Tuesday and the New Year content will be live on Wednesday. We will have to play two event stages at the same time. This brings questions about how EP is going to be handled.
Let's us know what you think about the new event in the comments!
Posted by Reploid21XX at 9:51 AM