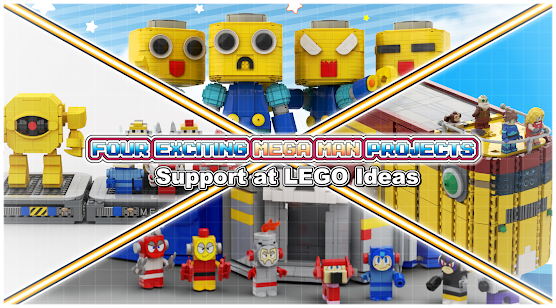 Have you ever wanted an official LEGO Mega Man set? Then look no further than these four auspicious LEGO Ideas projects by RockmanCosmo, MacAndCheez, and Brickman911!

Check out the details about these projects after the break, written by the creators themselves!

What is LEGO Ideas? Before we delve into these four projects, we need to explain what the LEGO Ideas program is.

LEGO Ideas is an official LEGO-run website that allows users to submit ideas for LEGO products to potentially become official sets. Users create a concept (build and description) and submit it to the LEGO Ideas website. Other users can freely vote on their favorite projects. Note that this isn’t crowdfunding - making an account and voting is 100% free. 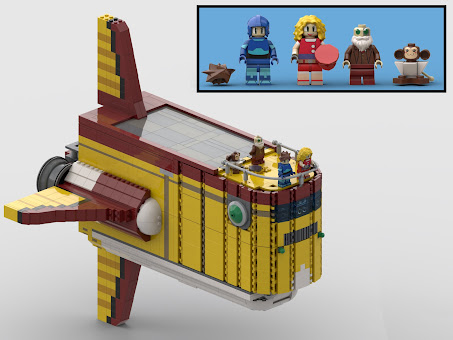 Hi! My name is RockmanCosmo, and I created the LEGO Flutter project.

I have been a fan of the Mega Man series for years, especially the Legends series. To expose a new generation of fans to this underrepresented spin-off of the franchise, I decided to combine my love of LEGO and Mega Man Legends to create a minifigure-scale model of the Flutter airship. My set comes with the Flutter, a stand that doubles as a display piece, three minifigures (Mega Man Volnutt, Roll Caskett, and Barrell Caskett), and a brick built figure of Data the monkey.

The Flutter’s two story interior contains rooms found in Mega Man Legends 2, along with many easter eggs. I made custom prints for some textures in the Flutter and on the minifigures, so they are accurate to the games. It took me around six months to design the LEGO Flutter by measuring dimensions in-game and figuring out building methods to faithfully construct this abstract airship. My ultimate goal with this project is to introduce the Mega Man Legends series to a new audience using the familiar, universal medium of LEGO.

More details and pictures of the set can be found at my project page. Thanks for supporting in advance! 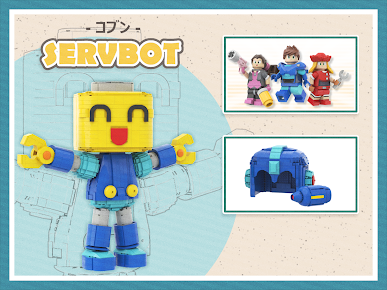 Hello, my name is Ravi (or Mac&Cheez if you like), and I’m the guy who made the LEGO Servbot project.

This submission includes a large full brick built figure of one of the characters in the mega man legends series that was also inspired from the Minifigures (and doing some extra research, Legends 3 web planner Kinako Ikawa also stated the team of Legends 3 also use LEGO Bricks for dungeon level ideas during development!) This Ideas project includes a large Servbot figure with extra pieces for customizing the face and the arms, as well with four additional characters being: Mega Man Volnutt, Roll Caskett, Tron Bonne, and an empty can. (everyone remembers empty can right..?) The concept also includes the classic Mega Man gear!

Not only it’s to help the concept submission more “mega man-ish” but also bring additional models to build and might appeal to Capcom, mega man fans especially both classic and legends fans to construct and display. In addition the helmet and buster cannon can also be attached to the Servbot!

Just like RockmanCosmo I believe Mega Man Legends deserves more attention and just for the fun and love of it perhaps we could go slightly bit further by us fans making a Lego Ideas project based on the Mega Man Legends series to softly introduce the franchise to newer, younger audience and builders to help the game series gain more familiarity for the franchise. Details and pictures of my submission can be found at my project page as well. Thank you in advance. ^^

I made these sets because I truly wanted to make something out of the ordinary and truly test my building abilities, so why not try it out with Mega Man? Now when making the Mega man 1987 display set I wanted simplicity for the build, so why not have brick built figures and a display set? It was easier said than done, as it was surely a challenge to make.

Now Dr. Wily's castle on the other hand was truly a challenge. I had no idea where to start; I was deciding whether or not to make custom mini figures, but seeing as Lego Ideas’ molding policy was in place I had to get creative and make brick built figures. Honestly, they turned out great. There were a few ups and downs, but nonetheless I put in my best and made it work.

The more and more I started building these LEGO Ideas sets, the more I got sucked into the world of Mega Man. I now see how truly awesome a fandom can be when you truly work hard on something great. I am thankful for my past and future supporters of my project. And those were the four LEGO Ideas Mega Man projects! If you are interested in supporting, go to all of the projects’ respective project pages and give them a vote! If you want to stay up to date with each creator’s project and check out some of their other LEGO builds, check out the Twitter profiles of RockmanCosmo, MacAndCheez, and Brickman911.
Posted by Protodude at 8:05 PM