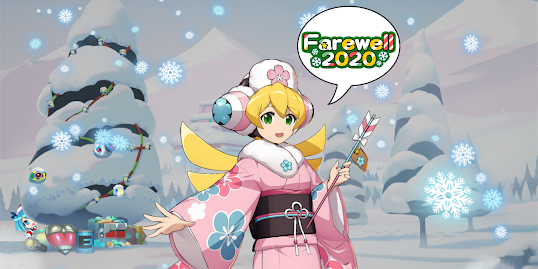 While the Christmas event is still going on, the Rockman X DiVE development team have delivered another event to close out the year. In addition to the New Year event, this week's update includes many other interesting activities to keep you busy for a while. Let's check everything out after the break!

The Banner with New Year Cinnamon and the Shooting Dragon buster is already live through January 13 at 15:59 (UTC +8). On top of that -- and with the "Christmas Leviathan and Bit" banner still going on -- the development team released two new banners as well: Special Character Capsule for January and Special Weapon Capsule for January. These two banners will yield one guranteed S rank character or weapon, but they are both only available if you use paid EM.

Inflicts 134.40% attack damage to targets within range, and paint their faces black to cause Blind.

Send a shuttlecock by hitting it with a racket to cause 270% attack damage to the target.

Boss Sentinel: When you are attacked by a boss character, reduce the damage you take by 10%.

Godly Pull: Gain 1 random buff after using the skill, which can only be used again after a 4-second cooldown.

Mobility: The preparation time of the Jeu de Volant is reduced by 20%.

Wheel of Fortune: When hitting a blind target, increase damage by 20%.

The Auspicious Dream of the New Year event stage is already live through January 12 at 22:00 (UTC+8).

As usual the event runs with EP... but fear not! You don't have to split your current EP playing the Christmas stage and this one. The development team will send you 48 EP every day until January 5 to compensate for the fact that the game has two EP events running together. The good thing is you can use the EP as you wish; split it between both events or use all of it in one event.

This are the characters that give extra coupons and dealt extra damage.

And these are the rewards you can get using the coupons, special mention to the "First Dream of the Year" card. 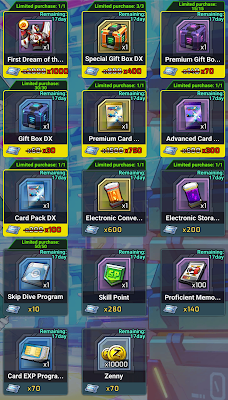 In the Japanese culture, the first dream one has in the new year is called Hatsuyume (初夢). The content of said dream foretells your luck for the coming year. It's considered good luck when you dream about Mount Fuji, an eggplant and a hawk. This is pretty much what this event stage represents: the player's Hatsuyume.

The stage has a big eggplant, a futuristic Mount Fuji in the background and, of course, a hawk: Flaming Storm Eagle. While a really interesting remix of the Storm Eagle Stage theme plays, you will be collecting Ryo, a gold currency used in pre-Meiji Japan. At the end of the stage you, will reach the sky to do battle with Storm Eagle on board a ship full of Ryo.

In this event, you have to complete the following missions to get New Year Money sent by different characters in the game: X, Zero, Axl, RiCO and ViA

The New Year Money sent by RiCO and ViA has EM and a variety of memories inside while the others have Proficient Memory Cards, Zenny and the usual common items.

The fifth part of Operation X'mas Present is live from today through January 6 at 15:59 (UTC+8). Week five of the event has the following set of missions to complete and their respective rewards. 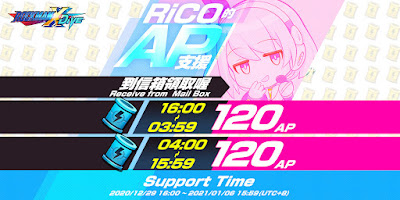 And lastly the Merry Christmas! event has a new set of missions to complete. You will be asked to complete the event stage in all the difficulties available plus other general missions like "Conduct Research 3 Times" or "[Daily] Accumulate 2500 Event Coupons". The rewards are the usual EM, boxes and event points.
If you are interested in the items added to the store and bug fixes, you can check them here.
-----------------------------------
This is the last Rockman X DiVE article of 2020. We made a little over 100 posts covering the game this year. It's a LOT and it takes a considerable effort to be on top of the near-daily news. Thanks for reading and we hope your first dream of the year has Mount Fuji, an eggplant and a hawk in it!
Posted by Reploid21XX at 10:30 AM