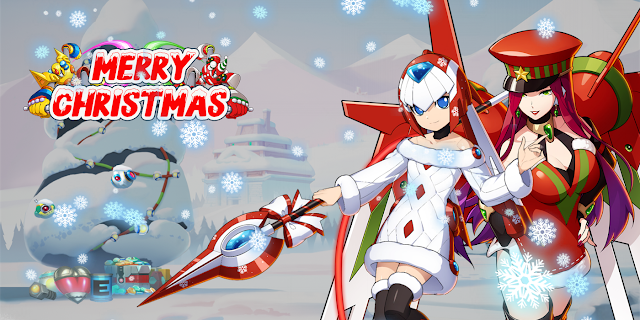 The final Rockman X DiVE event of the year is here. Although the development team already revealed everything -- from the playable characters to the Christmas Bit skin -- we're here to look at all the details! Hit the jump below!

Launch a shockwave with javelin attacks you perform to deal damage equal to 225% of your attack to the target.

Spin the javelin to create multiple ice crystals that will rotate in formation and travel at the target. Each crystal will deal damage equal to 0% of your attack to the target.

Cold Javelin: When you hit a target with the Ice Javelin, there's a chance to cause your target to become slower with 15% reduction in movement speed, stacks 3 times.

Cold Ring: When Ice Ring hits a target, there's a chance to cause your target to become slower with 15% reduction in movement speed, stacks 3 times

Marine Snow: When using Ice Ring, you will summon enemy-seeking Marine Snow which will explode after making contact with the target, when its attacked or after 6 seconds, dealing damage to targets within range.

Holy Night Pursuer: When causing slow or when hitting target that has been slowed, recover HP equal to 20% of your attack. This effect can only be triggered again after a 6-second cooldown.

Eternal Freeze: Increase the number of ice crystals created when using Ice Ring to 8 and become invulnerable when the skill is active.

Crash forward, inflicting 240% attack damage to all targets in your way and take no damage when the skill is active.

Inflicts 0% attack damage to the target and rendering the target immobile.

Mobility: The preparation time of the Bind Ring is reduced by 20%.

Power Increase: Increase the damage rate of Forward Slash by 5%.

Nightmare Police: When causing immobile or hitting a target that is immobile, your movement speed will increase by 30%. This effect can only be triggered once more after 3 seconds.

The banner with the Christmas Leviathan, Bit, the Shooting Dragon buster and the Shadow Noise buster is already live through January 06 at 15:59 (UTC+8). After the Berserker saber from the previous week, we have another weapon from the Star Force Series: the buster from the Star Force transformation Green Dragoon from the first Mega Man Star Force game. How long until the first Star Force characters start showing up in the game? Your guess is as good as mine.

The main attraction of the event is the "Merry Christmas" event stage that takes place in a snowy mountain. It delivers another great remix, this time Blizzard Buffalo Stage remix from Rockman X3.
In this stage you will be collecting socks but you don't have to bother searching them; they are pretty spread along the path on your way to the boss. You can get more than the seven required to get the completion star. The characters and weapons that will grant you more points or dealt more damage are as follows: 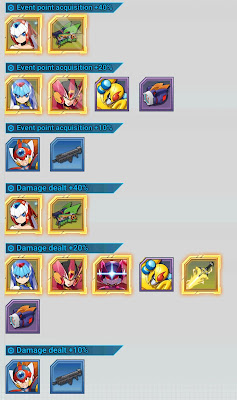 As for the rewards, it's just the usual items plus six "Merry Christmas" cards, the memories necessary to unlock Bit as playable character, and the "Christmas Bit" skin. We will talk about that a bit later.
In addition to the awards from the event rewards list, the development team will send you more rewards to your in-game mailbox if you reach the following goals:
The Rewards will be sent to your in-game mailbox before January 13 at 23:59 (UTC+8).

The fourth part of Operation X'mas Present is live from today through December 30 at 15:59 (UTC+8). Week four of the event has the following set of missions to complete:

By completing these missions, you will gain the following rewards: "Christmas Giftboxes", "Christmas Activation Cards" and "Premium Card Packs".

The Memorabilia from Snow Festival event is already live through January 5 at 22:00 (UTC+8).

With this "memorabilia" you can get the following items from the store: 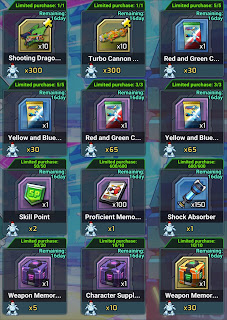 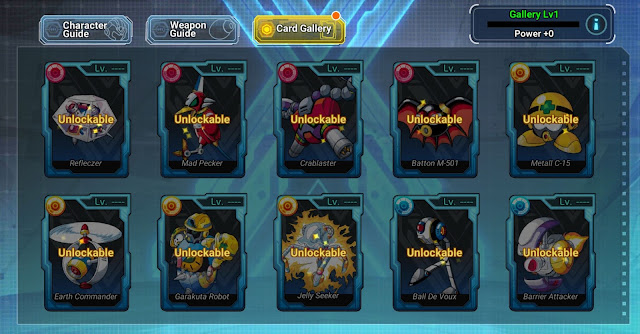 Cards have been added to the Gallery and with this the chance to rise your player power. It works exactly as it does with weapons and characters, but cards only have 3 type of goals to raise power. Acquire the card and progressively raise their level and rank. The game has more than 100 cards already, albeit the player power you will get from them is nothing out of the ordinary. Every bit helps, right?

If you are interested in the items added to the store and bug fixes, you can check them here. Lastly, next week's maintenance period will be on Tuesday as opposed to the usual Wednesday.