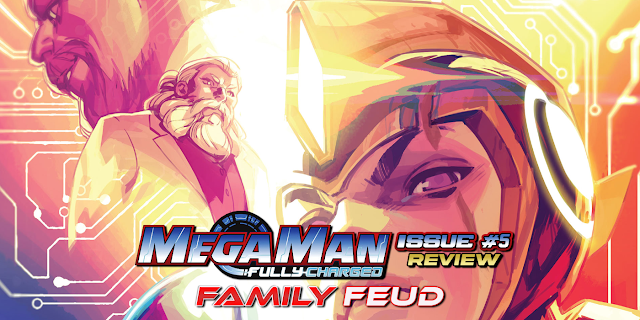 The second to last issue of the Fully Charged comic is finally here. The battle between Daini and Mega Man is about to start! You can read our recap and opinion after the break!

The issue starts where issue #4 left off with Daini using Skull Man schematics and ready to finish the fight with his brother, Mega Man. 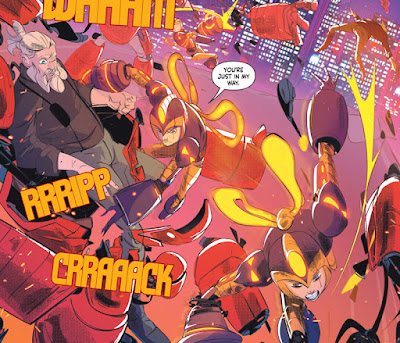 Mega Man confronts Daini, who asserts that he finally chose a side: "I'm on my side and mine alone". Dr. Light tries to intercede between the brothers but Daini is not up for a lecture. He quickly destroys Light's exoskeleton, wounding him.

Mega Man and Zero confront him but they are no match. Rush answers Light's call to help Mega Man but he ends up hurt. As Mega Man runs to aid his trusty canine friend, Diani punches the ground with his drill creating a shockwave, causing a building collapsing on Mega Man and Rush.

Zero returns to the scene to continue the fight against Daini and they talk about family values. Daini asks Suna, "Why fight for him?" Suna answers, "It's not about blood. You don't love your family because you have to. You love them because you choose to". The fight continue but Daini overpowers Zero, destroying her helmet. 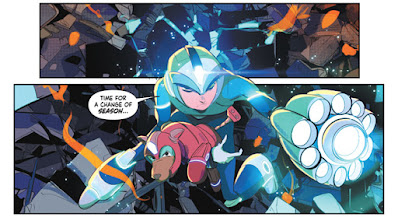 Mega Man equips Ice Man's schematics and blows the wreckage escaping with Rush to resume his fight with Daini. The battle continues with Mega Man getting a little space to breathe after equipping Air Man and Fire Man's schematics. However, it's still not enough to defeat Daini. Mega Man ends up buried in the ground, defenseless.

Light tries to calm Daini down, talking about love and family. Daini is not up for it and goes for a final blow. He drills directly into Mega Man's head hatch aiming to trigger a "reboot".

Oblivious to Daini, however, what he triggers is a "memory flashback" due to both Daini and Mega Man having the same programming. 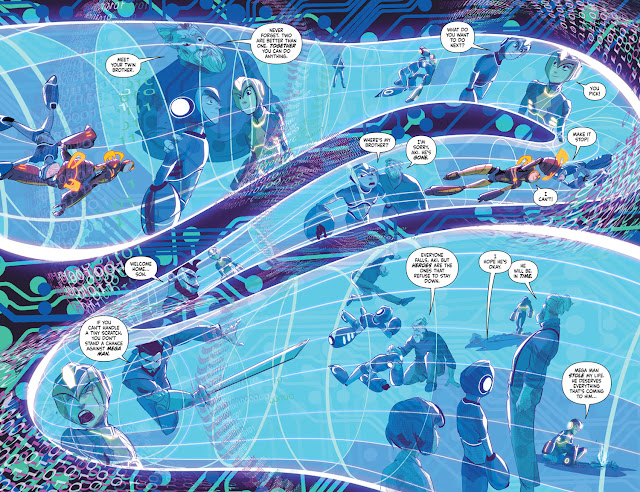 When both come back to the "real world", Daini is in disbelief, not wanting to believe there was a time when his family was kind to him. Daini suddenly attacks Mega Man in the chest. Light and Suna step in to cover Mega Man while he retreats, but not before telling Light, "I remember everything, dad. My childhood with Daini, the reason I was built... No, reborn. Daini deserves the same chance. Let me talk to him." Light, however, advises that Daini won't listen. 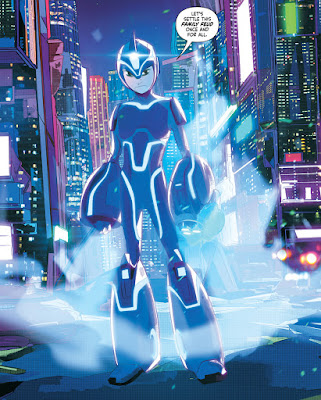 While Light and Suna keep fighting Daini, Mega Man activates the Fully Charged Mode against Mega Mini's advice. Returning to the battle, Mega Man declares, "Let's settle this family feud once and for all."

For issue #5, A.J.Marchisello returns as the writer. The rest of the creative team remains the same as usual -- Stefano Simeone is at the pencils, Igor Monti on coloring duties and Ed Dukeshire on lettering.

When it comes to the story of this issue, I found it to be the weakest of the series so far. There is not much development and it's basically a fight between the Light family and a lot of drama with Daini. Daini has a lot of trust issues, which is understandable after what he suffered by the hands of Sgt. Night. Still, this feels like a storyline that we have seen a million times and pretty much runs the length of this entire issue

Even so, there was still some cool stuff here. The "memory flashback" or seeing the whole Light family together.  More than anything, though, I'm excited to see the finale next month and especially what role Wily plays in the last issue. It will also be interesting to see if they leave the door open for more comics in the future.

When it comes to the artistic side of the comic, there is not much to say other than repeat myself. The color is splendid and the art by Stefano - after getting used to his unique style - is also fantastic.

I particularly enjoyed the two pages where Daini and Zero fight, which resulted with Zero's helmet getting destroyed and the two-page spread of the "memory flashback" and the composition and rich background of the final page when Mega Man shows up in his Fully Charged form are among my favorites.

Let's us know what you think about this issue in the comments!