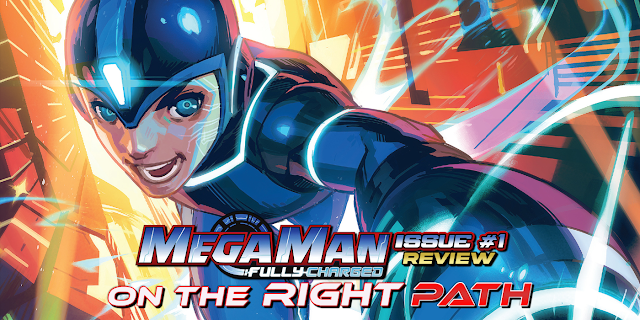 It's been almost 5 years since the last issue of Archie's Mega Man comic was published. Many fans have mourned both the comic's absence and the ritual of reading new Mega Man stories on a monthly basis. And finally, after all this time, another comic based on Mega Man hit comic book stores.

To everyone's surprise, though, this comic is neither edited by Archie nor based on the video games. Instead, it's a continuation of the Mega Man Fully Charged animated series.

How did the first issue turn out? You can read my opinion after the break! Beware, it has SPOILERS! 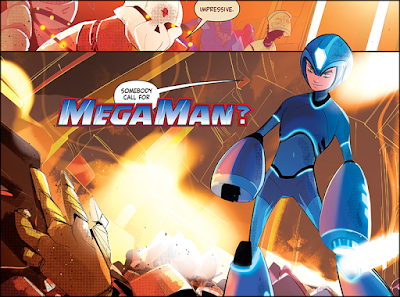 The comic book is illustrated by Stefano Simeone and colored by Igor Monti. I have nothing but good words to say about Igor Monti's work. The pages are colorful and vivid. I particularly liked the magenta and green colors chosen for the flashback scene. Stefano Simeone's drawing style is not my cup of tea, though.

Stefano is undoubtedly a talented artist. His page composition is great, the few action scenes the first issue has are fluid and easy to read. The use of perspective in some panels is fantastic, but there is a certain degree of unevenness that isn't too pleasant to my eyes. 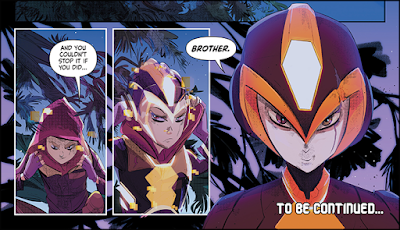 I like Stefano's interpretation of some characters like Dr. Light (he's a bit more lean than the animated version) and a couple of pages are in particular are just stunning. Skull Man's introductory page and the scene where Skull Man attacks Mega Man, triggering a forgotten memory, are fantastic.

However, I have a few things I didn't like: the way he draws Mega Man and Skull Man's arms (who has very exaggerated proportions and tiny hands), the general unevenness of shapes (this is especially noticeable on Namagem's head in the last page), and minor mistakes like forgetting to properly draw Suna's T-shirt from one panel to another on the same page. In general, I don't think his style suits a Mega Man comic book, even for one that has a more mature tone.

All in all, that's his style. It isn't for everyone but I'm sure I will get used to it as the series advances. I look forward to hearing everyone's opinions on the art in the comments!

Moving on, issue #1 is written by A.J.Marchisello & Marcus Rinehart and in general they have done a solid job. Although they're working with a story created by the kid-friendly animated series, they managed to make it feel totally fresh. The tone of the story is completely different from what we've seen from the show.

This take on Mega Man is unlike anything we have seen before based on the classic series. It's dark and gritty, dealing with topics such as civil unrest and Robot Masters being terrorists, who are rising up as an army. This is not a kid's show anymore.

The first issue does little to help people without prior knowledge of the Fully Charged storyline to get a grasp on the overarching narrative. The book is mostly aimed at people who watched the animated series. 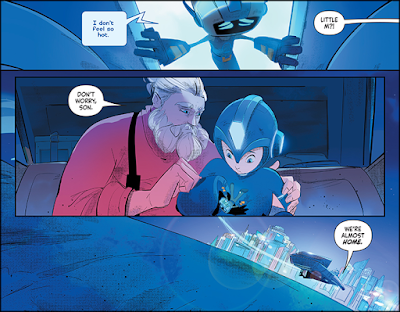 Who is Lord Obsidian? What is that small robot inside Mega Man's head? Or what's the deal with the "Hard Age"? Those are fair questions to ask if you haven't watched the show. Personally, I think the comic needed a page to recap the basic plot points of the animated series. But fear not: the comic is still enjoyable if you approach it with no prior knowledge. Some of these topics will organically be discussed in future issues.

When it comes to the story of this first issue, I particularly liked the fact Mega Man is not fully shown until page 12. Until then, the spotlight falls on other characters like Namagem, Dr. Light and Skull Man. When Mega Man finally shows up to save Dr. Light from a certain death at the hands of Skull Man, he does it with style.

Unfortunately, it's over pretty quickly. After that, Skull Man launches a surprise attack and strikes Mega Man with drill-arm-like directly into his head hatch. This triggers a flashback to the Hard Age. 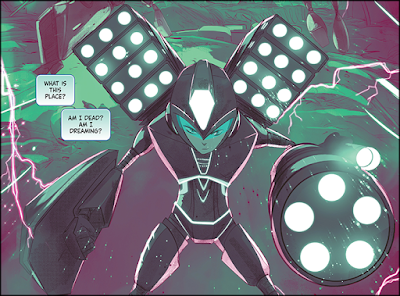 The Hard Age. That's the highlight of the story and what truly makes me want to keep on reading the comic. The flashback triggered by Skull Man depicts a fully-armed Mega Man fighting against an army of robots alongside Dr.Light who is equipped with an exoskeleton. Although the flashback is cut short by Dr. Light, the seed is already planted in Aki's mind.

What was his involvement in the Hard Age? Why has Dr. Light never spoken about it? Mega Man desperately seeks answers and he will likely find them in a lecture Wily is giving at Silicon's City University. And no; it's not Bert Wily from the animated series. This is Fully Charged's take on the "real" Doctor Albert W. Wily, at last. Things are getting interesting, aren't they? But that's a story for another time when issue #2 is released.

I have to confess I was not a fan of the animated series and the tone of this comic is not something I would have chosen for something loosely inspired by the classic series. But surprisingly enough, I enjoyed it and I see a lot of potential and room for it to become something great.

I'm looking forward to reading the next issue! Hopefully based on how well issue #1 sold, it will extend beyond six issues.