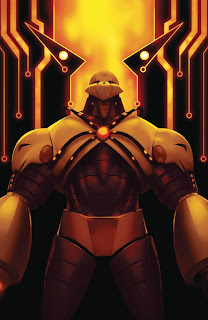 Here's a look at one of the cover variants for Mega Man Fully Charged Issue #3 drawn by Miguel Mercado. Issue #3 will be in stores on October 28 for $3.99. It's written by AJ Marchisello with interior art by Stefano Simeone.


Mega Man fears he is not strong enough to protect Silicon City after he learns of a plot for a new robot uprising led by Skull Man and a shocking ally! But can Mega Man trust Dr. Wily's offer to make him the upgraded hero Silicon City needs?


So in case there was any doubt, that's indeed Skull Man. There was some speculation that this mysterious skeleton-bot could have been Doc Robot. Ah, well. Maybe next time!

Source: Previews World
Posted by Reploid21XX at 9:29 AM