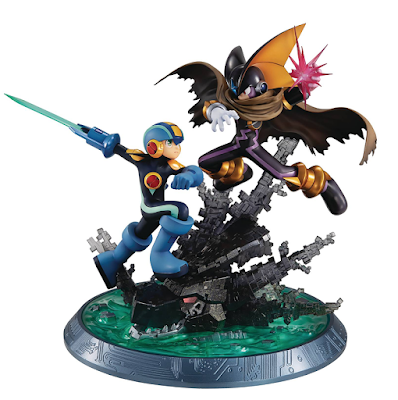 MegaHouse's much-anticipated Mega Man.EXE vs Bass.EXE statue is officially headed to the U.S. The news comes to us via Previews World and a recent Amazon pre-order page.

"From MegaHouse. From MegaHouse comes this Game Character Collection DX figure of Mega Man and Bass battling each other atop the head of Treble! It measures 7.9" x 9.4" and has been created with incredible attention to detail. They stare down one another with serious expressions as they prepare their next attack. Mega Man can be displayed with or without his battle mask. The intensity of the scene is expressed through dynamic sculpting such as the billowing of Bass' cape. The shimmering, transparent head of Treble and base with circuit board-like details engraved around its border completes the atmosphere of the piece. Display this fierce battle of the cyber world in your collection!"


The statue is expected to go on sale starting February 24th, 2021 for a suggested retail price of $229.99. However, it's worth pointing out that Amazon are offering it much cheaper -- about $181 at the time of this writing. That price is much closer to it's Japanese counterpart, which goes on sale in December for 15,400 yen or roughly $145 US.

My advice to you is, wait just a little bit longer before placing a pre-order. The final price tag probably isn't set in stone just yet. Ideally, it really should cost no more than $200. We'll see.
Posted by Protodude at 6:19 PM