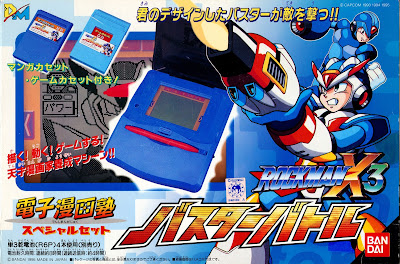 We've ran a couple stories about Rockman X3 Buster Battle on the blog before but, for the uninitiated, it's a bite-sized RPG where you draw weapons for X on the built-in touchscreen and battle various Mavericks. Check out some gameplay here.

Now, although Gaming Alexandria have successfully preserved the game, you can't exactly play it - yet. The Design Master itself doesn't have a working emulator, though that is a task currently being headed up by Team Europe. In the meantime, though, you can still download the game AND the some very high quality scans of the packaging, manual and cartridge.

So head on over to Gaming Alexandria's page on the Design Master and scoop up some obscure blue bomber history!

Posted by Protodude at 7:12 PM