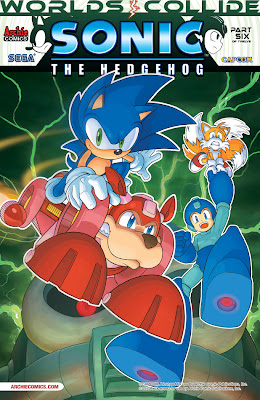 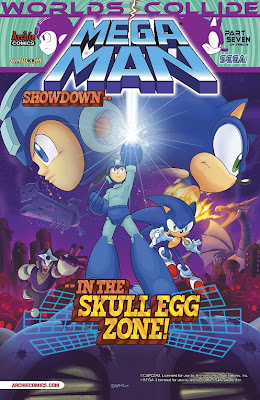 Newsarama brings us our first look at "World Collide" part 6 (Sonic the Hedgehog #249), which features a nice "sidekick swap" illustration. Part 7's cover (a spin on Mega Man 10's "box art") comes by way of Kotaku. No solicitation for that one right now, but here's the synopsis for part 6:

"When Worlds Collide" Part Six of Twelve: The crossover mega-event reaches its half-way point! On the eve of Sonic the Hedgehog's landmark 250th issue, Sonic, Tails, Mega Man and Proto Man are confronted by Drs. Eggman and Wily and the eight Roboticized Masters!  Why do they look so familiar to Sonic?  Do our heroes even stand a chance?!


For the full solicitation, head to Newsarama!
Posted by Protodude at 3:35 PM