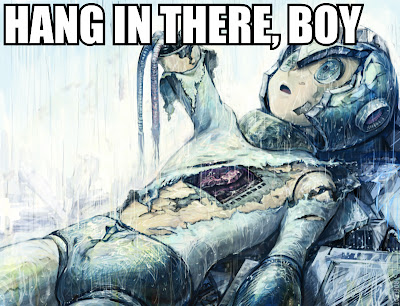 The folks at Capcom have made a lot of noise about plans in the works for Mega Man's 25th anniversary. However, that doesn't mean you'll be hearing announcements all the time. When questioned about what's going on with the whole "no news" thing, Capcom's Brett Elston made this response...


Coming from the Ask Capcom forum:

"Like we've said many times, the MM25 plans for the west will go on throughout 2013. We had to focus on SF25 from July~December (because the grand finals ran all the way to 12/8) but ever since SFxMM we've directed attention to Mega Man. But, plans and news take time, and that's why we were clear very early on that we would have to stretch this window through to the end of 2013. When Dec 31, 2013 elapses, feel free to evaluate the anniversary efforts.

And if you want some kind of reassurance that we're doing "something," then yes, we are. I'm personally trying to get a couple of fun things moving, and other departments are moving along as well. But if you're solely waiting for a game announcement, it's true that will never happen in a forum thread and it will still be a while before that happens. When it does, we'll announce it with bluster and you will know without having to come to Unity to find out :)

I know it's been a trying couple of years. Not going to dance around it or sugar coat it. But we're working on it and hope to have better things to say and share before 2013 ends. In the meantime, I'd ask to not mistake silence for inactivity - things are happening, we just have nothing specific to say at this moment in time.

I'd also ask everyone to be weary of rumors. They have a way of setting expectations that are impossible to fulfill, because they were never in the plan at all. If you hear Game X is coming to Vita, or more Marvel is on the way etc, take it with a grain of salt."


And that's all there is to say, really. I know it's been a rough wait for something substantial to surface. But constantly worrying about it isn't going to make these next ten months any easier. Yes; we all want a new game. But you have to bear in mind quality development takes a considerable amount of time (two years on average).

Best advice I can give? Enjoy what you got. There's 129 Mega Man games out there (seriously). Have you played them all from start to finish? Take this time to play some games you haven't touched before, or revisit an old favorite. And if you have played them all? Do something. Make some fan-art; produce your own Mega Man-inspired album; create your own game. Flex the fanboy (or fangirl) muscle!

Hang in there. We'll get through it.
Posted by Protodude at 1:18 PM