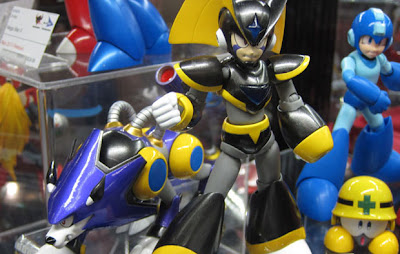 Been wanting to see even more of Bandai's D-Arts Bass? Toy and collectible site Tomopop has a very fine batch of photos straight from Toy Fair 2013. Click the link to check him out.

Additionally, Tomopop got to speak with a Bandai representative about the D-Arts line in general. Among topics discussed, the currents status of the proposed Sigma figure. Tomopop writes: "Also, you may be wondering what happened to D-Arts Sigma. He wasn’t forgotten about, but there is some trouble in engineering land as the joints pose a problem given his size. He’s not forgotten, but expect him to be released as a D-Arts Zero."

The "as a D-Arts Zero" tidbit is a little sketchy. But it almost sounds like Bandai is looking into making Sigma a lot smaller, to scale with D-Arts Zero. EDIT: Pointed out by a few of you, the representative might have been alluding to the Figuarts ZERO line of statues. If true, we can expect a fairly large, albeit unarticulated, Sigma.

In any case, I've contacted our Bandai source for clarification.