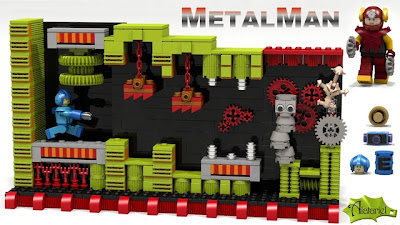 Have you ever heard of Lego's Cuusoo program? If not, then know this: it's an initiative that asks creative builders to submit blueprints for their very own Lego set. Blueprints that garner 10,000 supporters will be reviewed by the company for the opportunity to be made into an actual LEGO product.

As one can imagine, there's plenty of video game inspired sets up for support. And tucked away amongst hopeful Sonic, Zelda and Pokémon sets, there's Alatariel's Mega Man proposal. Taking a page from Mega Man 2, the project would include five sets: Metal Man, Wood Man, Bubble Man's stages, followed by Wily's Castle and the Wily Teleportation Room. There's even a range of accessories like E-Tanks, power-ups, and various Robot Master weapons. Hey, you can even build an Atomic Chicken!

Those interested can show their support for the project by clicking the conveniently named 'support' button right at the project's Cuusoo page. Head over to Alatariel's Flickr for more photos of each set!
Posted by Protodude at 11:49 PM