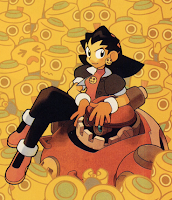 It's common knowledge by now that a PlayStation Network re-release of Mega Man Legends (and possibly its sequel) isn't happening. But what about The Misadventures of Tron Bonne? The quirky side-game everybody adores? Yeeeeeah... that's not happening either.

On Ask Capcom, user PluggedBus asked whether or not the game failed an I.P. sweep; the process of determining if software infringes any copyrights and contracts. Capcom Unity Community Manager GregaMan stepped in to deliver the bad news:

"Unfortunately, my understanding is that MoTB had some copyrighted music in it preventing a rerelease =\ A bummer, to be sure!"

I haven't played Misadventures in some time, so I can't pinpoint any specific examples of copyrighted music. However, the Japanese version of the game does feature two vocalized pieces, "Love Letter" and "Magic", sung by Mayumi Iizuka, Tron's voice actress.  Not that that has any relevance to the English version, but contract issues with her songs could explain the game's absence on the Japanese PSN.

So no Misadventures for PlayStation Network, I'm afraid. On the positive side, if you own a copy of the game, its value just skyrocketed!