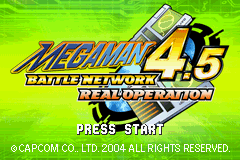 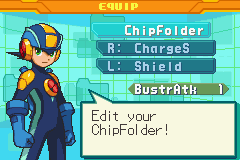 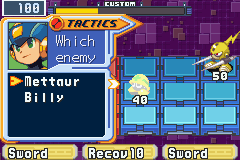 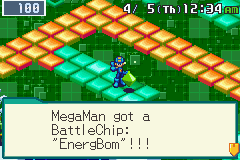 A Rockman EXE 4.5: Real Operation English translation patch is coming your way! Professor 9 has officially lifted the veil on the project via the Rockman EXE Zone:

"Rockman EXE 4.5 Real Operation is the only Mega Man Battle Network on the GBA that's still off-limits to English players. There was already a pretty cool partial translation patch by Spikeman, but I wanted the whole game in English. So I set out to make a translation patch on my own. This is the result!

I decided to hold off on announcing the patch until all the menus and other important things were translated, seeing as they were things I could do on my own or with help from a few friends, but the story is an entirely different story."-- Prof. 9

Currently, the patch does not have a release date. It'll be finished when it's finished, so to speak. In the meantime, you can download a preliminary version with some translated text here. The prof has most of the technical and graphical details nailed down, but he could use a hand or two from fans willing to translate and sift through dialog strings. The more people involved, the faster we can pump the complete patch out.

Those interested can find the full projects details here. Patch progress updates will be regularly made on Prof. 9's Twitter account here. Look forward to it!
Posted by Protodude at 8:55 PM