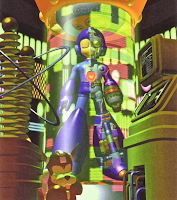 Much to the chagrin of fans, Capcom had nothing to show in regards to new Mega Man games at this year's Captivate press event. Granted, few Mega Man games have ever been announced at past Captivate conferences, so expectations were relatively rational from the get-go. However, many were hoping Capcom would use the event to finally detail their plans for the franchise's 25th anniversary.

Alas, nothing was said.

Following this morning's stream of announcements, Capcom Unity forum member Jimb0 sought assurance and asked when fans could expect some Mega Man news in light of the new fiscal year. Capcom’s Senior Vice-President of Planning and Business Development Christian Svensson quickly followed up with a response: "Likely to be a while still... these things take time."

Of course, this isn't too hard to believe. We already have been waiting quite a while, mind you. The good news is Capcom is trying to think of something to do with Mega Man, at the very least, though whether anything will pan out before December 17, 2012 remains to be seen.

In the meantime, all we can do is continue to wait and hope that something worthwhile comes to fruition.