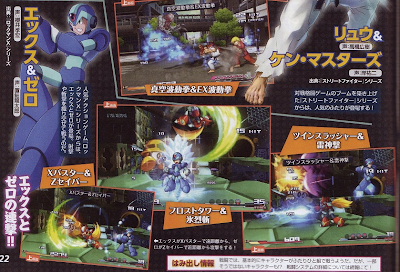 At last, Capcom's collaboration between Sega and Namco Bandai has been revealed in this week's Famitsu. As anticipated, the game is called Project X Zone (the 'X' is pronounced as "cross"). The game is a strategy RPG featuring characters from all three companies.

The good news for us? Mega Man X and Zero are in the game. According to the magazine, characters will team up in pairs for fight scenes. Naturally, X and Zero act as each other's partners. UPDATE: A scan of the dynamic duo in action has been revealed. The pair are shown duking it out with a Met in an area that strongly resembles Cyber Peacock's stage. Incidentally, the bottom right screen shows X and Zero performing attacks from X4 -- Twin Slasher and Raijingeki respectively.

The two Maverick Hunters will be joined by the following pairings:

Source: Andriasang (thanks, Jimb0!)
Posted by Protodude at 7:54 PM