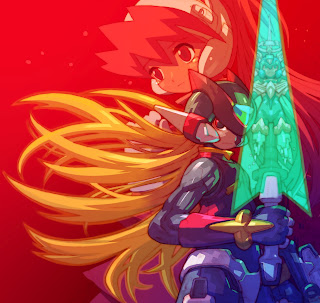 Looking back at the old preview materials from Zero 1, I feel needlessly old. Toru Nakayama's artwork especially triggers some fond memories.  At the time, no one really knew if the art style reflected some sort of enigmatic plot element. All sorts of theories were thrown on the table: was Zero infected by some sort of virus? Was this even Zero at all? In hindsight, it's kinda funny how the latter turned out to be pretty spot on.

For many fans, Mega Man Zero fulfilled the dream of a "darker" Mega Man. Things were more serious: more mature, edgier and bleaker. Death lurked around every corner. There was blood, too.

Initially, the prospect of a "grim dark" Mega Man filled fans with a sense of uncertainty. Some welcomed the bleak dystopian setting with open arms; others not so much. The biggest fear, I recall, was if this darkness would become the new norm for Mega Man. That prospect never came to fruition and, quite frankly, I don't think it ever will. Even so, much of Mega Man Zero's success is tied to the fact it tried to be different and embraced this brooding, dreadful world -- a far cry from the classic series' setting.

A decade later, the games play just as good if not better than many of today's action-platformers. Sure, they can be pretty tough sometimes. GameBoy breaking tough. But it's all in good fun; you come out of Zero's trials and tribulations with a sense of accomplishment. It feels good to win -- to conquer over something you once believed was impossible. That's Mega Man Zero for you.

So cheers to you, Mega Man Zero... and thank you, Inti-Creates, for creating four amazing games.
Posted by Protodude at 12:00 AM