Well, here's a doozy of a story coming from 100,000 Strong for Mega Man Legends 3. Before we proceed, I suggest you grab a shaker of salt. Ready? Okay. 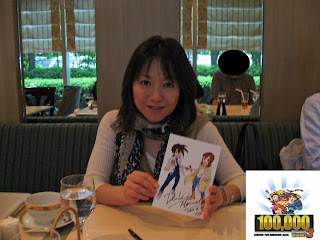 As you well may know, Reika Morishita is the singer behind the Rockman DASH theme songs “Another Sun” and “Your Wind is Blowing.” She has shown a great amount of sympathy towards Legends fans following the cancellation of Mega Man Legends 3, and has since worked closely with 100,000 Strong to raise awareness for the movement. To this end, Morishita announced plans to reprise her two DASH themes.

Tonight, 100,000 Strong brings us an update on this project following a meeting between Morishita and a member from Team Japan. Grains of salt from here:

"To support our community, she is going to release her Mega Man Legends soundtrack reprisals at the end of May or early July, tentatively. During the meeting yesterday, she said that if her new soundtrack makes over 20,000 sales, Capcom Japan is likely to release the Mega Man Legends 3 Prototype Version on the e-shop. Although there are no guarantees, keep in mind she is a well-networked individual."


There's two key words in there you need to keep in mind: no guarantees. The prospect of the prototype's revival is exciting, yes... but if the past has shown us anything, it's wise to keep your expectations in check.

Even so, it's good to hear Morishita's album is moving forward. All we can do now is simply hope for the best with reasonable expectations in mind. We'll keep an ear out for future developments.

For more details, check out this post.
Posted by Protodude at 8:39 PM