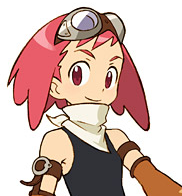 About a month or so ago, the DASH 3 Devroom played host to an exclusive event in which fans voted on their favorite of three voice actresses trying out for the role of Aero. Fast forward to today, and sure enough, we've got a victor.

Your Japanese VA for Aero, coming in with a grand total of 3,000 votes is... Akemi Kanda!   Hey, now, that's a name that shouldn't be all too unfamiliar: She previously provided the voice for Nana in Rockman X: Command Mission, and Ice Man in Rockman Rockman.

You can hear her winning audition tape over at The Mega Man Network -- Kanda's is Entry #1.

Can't say I'm surprised. This is the exact kind of voiced I had in mind when I first laid eyes on Aero. As for an English voice actress, well, we're still pretty far away from that point. Hopefully, we'll have a similar event on our end, eventually. I'll keep you posted!


Credit: The Mega Man Network
Posted by Protodude at 9:18 PM