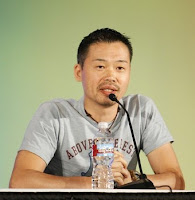 Keiji Inafune and Street Fighter's Yoshinori Ono will be attending the Micromania Game Show on October 31st, a convention hosted by Game Stop in Paris.  According to Gamekult, Inafune will lead discussions on future Capcom games coming in 2010, and will be signing autographs for fans.

If you're in Paris between October 31st - November 1st, stop on by -- should be fun.

Thanks for the tip, Shifty.
Posted by Protodude at 4:08 PM