The DASH series is infamous for its kinky sense of humor. A good amount of the the “adult themes" from the Japanese version were miraculously left intact in localized versions.

Tron Ni Kobun's release is the only exception as anything remotely obscene was either removed or altered. One such instance of censorship is the “design magazine'' item from the Bank Mission containing facts and tidbits about home decour.

Now I ask you, does this look like a "design magazine" to you? 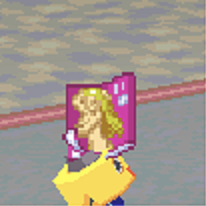