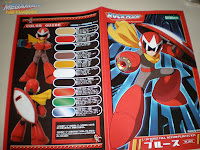 If you haven't heard already, Kotobukiya's 1/10 Blues model kit is now on sale in Hong Kong(?), and already units are arriving within the hands of fans overseas.

While the figure itself is something to behold, we cannot, however, ignore this little tidbit of interest. Coming from The Mega Man Network:

"First and foremost, however, it seems that Blues is the end of Kotobukiya’s Rockman line for the time being. In the space on the box where future figures are advertised, Blues’ box only remarks that Rockman and Roll are also on sale. So, if you’ve been holding out for a Forte or, I dunno, Bubbleman model kit, there’s no confirmation for you. Bandai will have the spotlight for the foreseeable future."

As I always say, if enough people are buying something, there's bound to be more.

If Kotobukiya were to produce more model kits based off of the classic series, which characters would you like to see next? Me? Well, I've always wanted Quint figure. C'mon, the guy rarely receives the toy treatment outside of some old gashapons.

Anywho, you can check out a gallery's worth of images of the figure, and some impressions of at The Mega Man Network.

If you imported, look forward to a package arriving sometime very soon!
Posted by Protodude at 12:03 AM