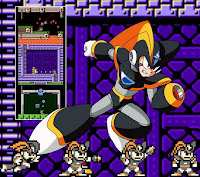 Capcom's Jgonzo has come through with a handful of details in regards to Mega Man 10's Bass mode in the form of a Q&A session between fans:

Ash: I have a question! Does Bass have the same weaknesses he does in Mega Man & Bass -- namely, he can't run while shooting (he has to stay still) and his shots can't travel through walls (except when in Treble Boost mode)?

jgonzo: Bass plays almost exactly as he did in Mega Man & Bass, so of course, he inherits all of his weaknesses from that game. First off, his damage per shot is roughly half that of Mega Man’s (to compensate for his rapid fire ability). He also can’t run and shoot like Mega Man, which makes him “stickier” to play as. Finally, Bass’ shots do not travel through walls a la Mega Man’s.
In short, yes, the weaknesses from Mega Man & Bass carry over.

LBD_Nytetrayn: Here's my question: does Bass get a story mode to call his own? Or is he simply "there" just because?

jgonzo: Yes, Bass gets his own story later on in the game.

Travis: Why doesn’t he have his Double jump?

jgonzo: Bass is a 16-bit era creation. With Mega Man 9, and now Mega Man 10, we wanted to go back to Mega Man’s 8-bit roots and present a true 8-bit retro experience. Bass had to be redesigned for this 8-bit world and unfortunately, his double jump was a victim of this process.

Specs: How is the dash performed? Double-tap a direction? Down + Jump? Both? Will Dash + Jump carry him further than a normal jump?

jgonzo: Down and jump! No double tap in this one, but yes it will carry him further than a regular jump.

More after the break!

wesome X: Will there ever be another megaman fighting game?
jgonzo: I hope so! Can you imagine a Super Street Fighter IV style Mega Man fighting game? Actually, I'd imagine it would be more like Power Stone, with its frantic, chaotic gameplay.

Cxplorer: What is the story behind Bass in Mega Man 10?
jgonzo: I can't tell you folks everything! You’ll find out soon enough. Suffice to say that Bass is always trying to prove that he’s the best, but we all know he has a soft spot somewhere inside.

A1-Steak: I wonder if Bass has altered RM weapon mods. (like the Tri Blade would be different, something like Blade Slash)… i noticed in the video preview image, Bass is shooting three shots. i assume thats blade man's weapon.. and it seems to be more armor oriented mods as it allowing him to fly around.
jgonzo: Unfortunately, he does not different special weapons that he obtains from robot masters. However, the flying around and shooting three shots scenario is actually Bass using Treble’s power.


RagingDemon015: Considering the wide variety of abilities Bass wields, will the difficulty remain the same upon using him?
jgonzo: The difficulty will be the same, but see the first question earlier about his weaknesses.


Jameson: I'm not sure if this is entirely on topic for your questions, but why did you opt to make Bass/Treble a new set of sprites instead of using the already existing 8-Bit sprites from Battle & Fighters?
jgonzo: Anything Bass is on topic!! Battle & Fighters’ visuals are very different than Mega Man 10’s, so it’s likely that the design team chose to build the sprites from the ground up to match Mega Man 10’s aesthetics.

Saje: I know he can slide and can only shoot standing still, but can he also shoot the special weapons in any direction?
jgonzo: No he cannot, and again, I think it’s due to the classic 8-bit gameplay elements that the team wanted to maintain.

NES Boy: Hey, you didn't change the the "G" (for Gospel) at 0:26 of the video to a "T" (for Treble)! I suggest you go back to whatever you used to edit the Japanese trailer for the English version and change it to the proper letter representing the English name. NOW!!!!!!!!
jgonzo: That G stands for GREAT support character…you buy that? No? OK. Moving on...

c-murph: Does Bass know the answer to the Mega Man 9 secret?
jgonzo: *muffled sounds* No, never.


GameDemonKing: Now, will there be any easter eggs when you play as Bass?
jgonzo: Define “easter egg”

Posted by Protodude at 5:03 PM