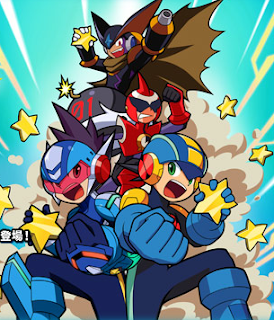 CoJ made a sizeable update to their Operate Shooting Star  homepage today.

The latest section offers a peek at SSRockman's various abilities such as locking onto foes from afar, shielding minor attacks and the rapid buster. These moves are exclusive to SSRockman, and can be fully utilized in multiplayer.

Next, we have a Program Advance section which shows off the new "Double Rockman" PA. The PA summons both SSR and Rockman EXE onto the field to deal some heavy duty damage. SSRockman's battle chip is required to execute this maneuver.

In the prologue section, there's some nice screens of OSS' new scenario wherein Mayl's Navi, Roll, is kidnapped. SSRockman is believed to be the culprit, but we all know who's really behind such a detestable act...

The finals section details the Rockman Colosseum multiplayer game. There's two modes in all:
Additionally, points earned in the Colosseum can be redeemed for rare chips in the main game.