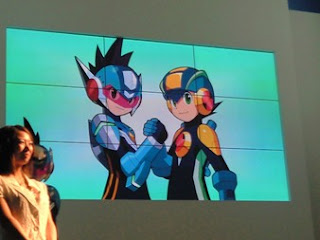 Courtesy of S.S.R , here's a summary of all the happenings at the recent summer World Hobby Fair:

- Wave Masters '09 drew quite the crowd. Various age groups participated with their own unique play styles and tactics. One participant was disqualified due to cheating.

- A kiosk was set up were participants could download "Crimson Meteor", an exclusive Giga Card. The lines were surprisingly long, stretching all the way back into Capcom's Monster Hunter booth.

- The game's conception was a response to those who wanted more out of the EXE series.
It is being touted as a "Data Action RPG."

- S.S.R is also under the assumption that it is a "remake." His reasoning is somewhat confusing, more so when read through a computer translation.

- Horinouchi plans to celebrate the coming of Rockman's 25th anniversary with a bunch of "new projects." No specifics yet, it's all just a bunch of ideas. Operate Shooting Star is just the beginning of what's to come.

- Capcom will open a OSS teaser website in the near future.
Posted by Protodude at 12:25 AM