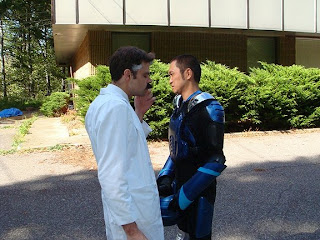 It's been a little while since we last heard from Eddie Lebron and his Mega Man fan-film. According to his recent blog post, Mr. Lebron is no longer aiming for a July 4th release, instead, he's hoping to screen the final film sometime in late July/August. The delay will benefit the final product and allow a more "legitimate" premiere featuring cast, crew and fans.

The film is currently in post production stages where more changes and additions are being made. Once things have settled down, Mr. Lebron has hopes of putting together a special edition cut of the film, containing removed scenes and original edits.

If you've got questions about the film, Mr. Lebron is willing to answer inquiries here.
Posted by Protodude at 4:34 PM