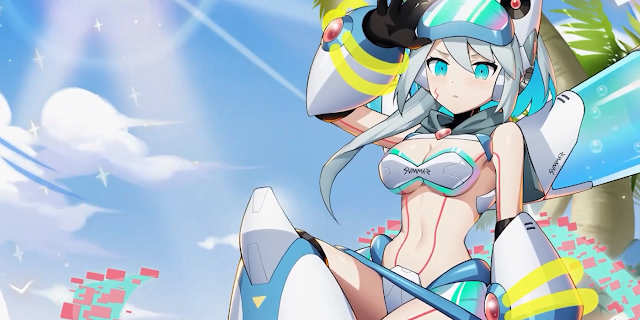 Initially teased two weeks ago, Rockman X DiVE's annual summer event has been revealed. This time, the development team are moving away from the traditional summer-time attire in favor of a little something different.

Swimsuit ICO's first active skill is Summer Surf. iCO jumps onto a surf board and rushes forward, damaging all enemies along its path. The skill can release water balls that ignore terrain and track the target, too.

Her second active skill is Tornado Rampage. It surrounds iCO with two tornadoes that deal damage when they come in contact with enemies.

Among other utilities, she comes packed with a speed buff and a shield.

As you may remember from the roadmap, we're expecting another summer character to be revealed. Keep your eyes peeled and let us know what do you think of Swimsuit iCO design in the comments!