A Look Inside the Rockman DASH Great Adventure Guide

After a year and a half of work, the English fan-scanlation of Rockman DASH Great Adventure Guide is finished! The two-decade-old book contains tons of rare concept art, developer scribbles, and insight into Rockman DASH’s development.
With the advent of this scanlation, a multitude of information has been translated in English for the first time ever. Needless to say, there’s so much ground to cover! To give you a taste of what’s inside, the scanlation project’s leader, RockmanCosmo, will highlight a few interesting discoveries. 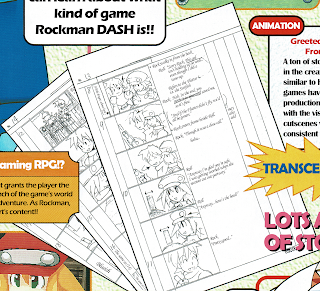 Storyboards With Early Dialogue and Shots

The book offers a glimpse at the numerous storyboards made for DASH’s cutting-edge cutscenes. Compare the early script to the final game’s dialogue! 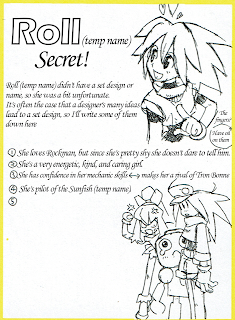 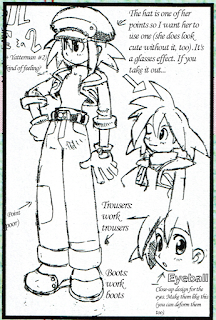 The Beginnings of Roll Caskett

Here are two pieces of translated developer scribbles about Roll Caskett. They must have been recorded early in development, as they hadn’t even solidified the name “Roll,” only using it as a placeholder. Also, there's a note referencing Yatterman-2! Fans have long speculated that Roll’s design was inspired by Yatterman-2. It's nice to get some official confirmation! 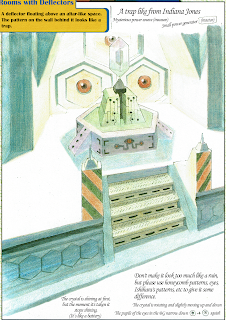 Although the inspiration was far from subtle, this piece confirms that DASH’s famous opening Ruins trap was inspired by Indiana Jones and the Temple of Doom! 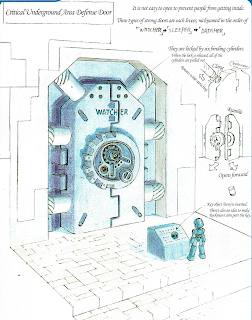 The Watcher Door
This is a very detailed piece of the Main Gate's Watcher Door. I find it interesting how they contemplated using Volnutt’s buster as a key to the door, much like how Samus uses her arm cannon to access recharge stations in Metroid. I have a theory about this one. I believe they were going to use this room for the scene where MegaMan Juno retrieves a map of Kattelox Island before initializing the reset. Using a hologram instead, it could have been far grander. Also, note that the city hologram is incredibly similar to the concept art on page 34. I imagine this room was scrapped due to hardware limitations. 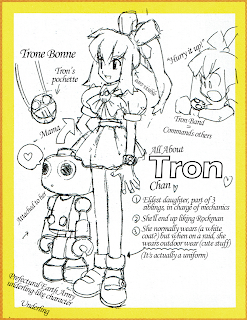 This plan for Tron Bonne’s character was made in the early days of DASH’s development. They already had ideas for her to be a mechanical genius, evident through her “Tron Band.” It's also revealed that the Servbots were inspired by the evil underling characters from an obscure manga (later adapted into an anime OVA), Prefectural Earth Defense Force. You can see what they look like here. There’s definitely a resemblance. Also, Prefectural Earth Defense Force’s bad guys even had meetings about why they lost! 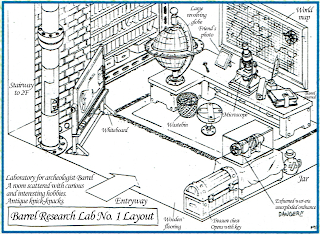 I highly encourage you to check out the rest of page 73; it's decorated with detailed pieces of art and developer notes on the Flutter’s many rooms. Barrel’s room is interesting because of the “exhumed war-era unexploded ordnance.” Could it be from the Great War (mentioned earlier in the book), which may have sunk the world's continents? This item is present in the game itself, although the description simply describes it as a “bomb.” 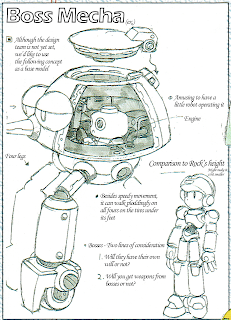 This early mecha design resembles the Ferdinand from a pre-release build of DASH from E3 1997. It appears the team were deciding if these bosses would resemble those from the Classic and X series, where they would be independent beings with obtainable weapons. 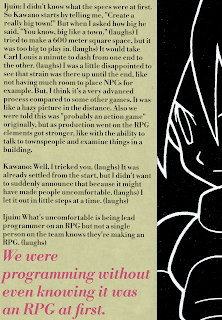 Trickery in the Development Team

The last few pages are dedicated to an interview with the game's development team. There’s a lot to decrypt here, but I found it pretty funny that Kawano didn’t initially tell the development team that they were making a Rockman RPG. It goes to show how novel the concept was back then!

I hope you enjoyed these snippets from the Rockman DASH Great Adventure Guide. You can find the entirety of our project here. It's available in single page JPGs and two-page spread JPGs, along with PDFs of both.
Also, at the bottom of the linked webpage, there is a list of our project’s team. Pplease give them all a follow; this project wouldn’t have been possible without them. Have fun discovering these newly-translated pieces of Rockman DASH history!
Posted by Protodude at 1:51 PM