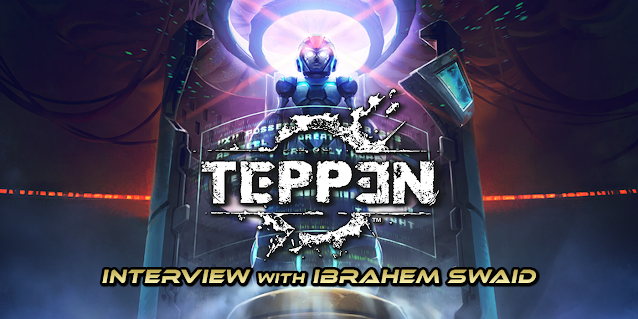 Hot on the heels of Teppen's 3rd Anniversary we had the chance to catch up with one of the most prominent Teppen artists ⁠—Ibrahem Swaid.

Ibrahem has worked on ten of the seventeen card packs with cards based on Street Fighter, Monster Hunter and Darkstalkers, to name a few. When it comes to the Mega Man X series, he's drawn twelve cards, including fan-favorites like "Theft and Betrayal" and "Hope for the Future".

You can read our interview with him after the break!

Thank you for taking the time to answer our questions. Can you introduce yourself to our readers?

My name is Ibrahem Swaid aka Noobovich, I am a concept artist and digital illustrator. I have been doing freelance for almost 10 years.

What made you want to become a concept artist and illustrator?

I did study Fine Arts as an undergrads, at the start I really wanted to work in comics, but I think that I liked working on the covers doing a full illustration more than inking and coloring pages, so I tailored my portfolio toward that.

What is your dream job as an illustrator?

I really enjoy working on my IPs the most, so that would be the perfect scenario. But I don’t mind doing illustrations for big IPs, comics movies etc.

Who are some of your favorite artists and sources of inspiration?

There are couple of names that I look up to such as: Evan Lee, Ruan Jia, Shoujo Tsubaki, Vania Zouravliov. The list is long but honestly it all depends on the project am working on, different style and different tools each has a list of artists that I take as inspiration.

What kind of tools do you use for your drawings?

Photoshop is the main program I use, alongside that I use 3D software as a supporting tool.  At the moment I am learning Zbrush and trying to get myself into sculpting as well.

On average, how long does it take you to draw a single Teppen card? 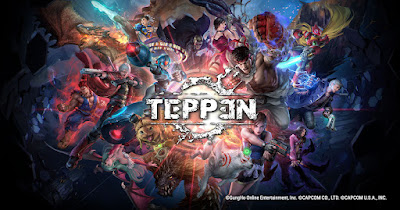 From what I remember, it took me around a week to finish a single artwork, taking in consideration the cycle of revisions and changes.

Were you familiar with the Mega Man series before getting hired to work on Teppen?

Yes sure I was, but not really. I know the overall concept, and I did play Mega Man X4 a lot.

What Mega Man games or series have you played and which ones are your favorites?

The only one I played is Mega Man X4, but I think I watched a lot of the other titles on Twitch or YouTube.

What kind of research or reference materials did you use to draw your Mega Man X cards?

Capcom provided us with all the materials we needed, character sheets and they were very precise with their IP and characters. But in general, I would go online and look at what fan art is available for the character I am supposed to paint, because usually Capcom will have just a single artwork for the character, but fans have more stuff for me to study.

From the Mega Man X cards you have drawn, do you have any favorites? 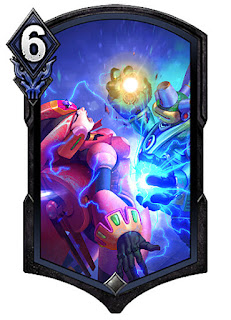 I would say “Theft and Betrayal” was pretty fun to work on.

Did Capcom/GungHo provide any guidelines or did you have complete freedom when drawing your illustrations?

Usually I would send them 3 sketches for the composition, they will pick one and guide me through it. But yeah they did pay a lot of attention to all the small details in the artwork.

The last time you drew a card was for the "Mission of Ruin" card pack released in November, 2021. Do you think you will have the chance to return to draw more? If you do, what characters would you like to draw that you hadn't already?

Sure I would be interested to jump back in and do more illustrations for the game. As for the character, I would like to try and paint Mega Man himself as I didn’t get that change as much first time around.

You have drawn cards for most of the series represented in Teppen, from Mega Man to Resident Evil and many others in-between. Which series was the most fun to work on? Do you have any favorites?

Probably Mega Man and Resident Evil. The funny thing is that when the new tasks are posted it is usually a first come first serve kinda situation. I think I came late for the first couple of rounds, ended up with Mega Man cards, but once  I got the hang of it I started picking those up :P . the only series avoided was Monster Hunter.

Teppen is not your first card game. You have worked on other card games like Faeria, Eternal, Alchemical INC. and Twisted Fables. Are you particularly drawn to this genre? What is the main difference between working on those games and Teppen? 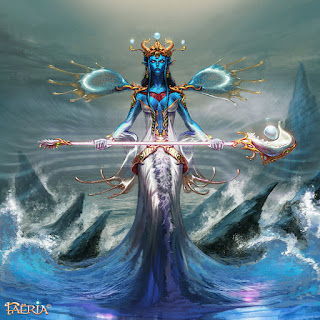 I think my portfolio is tailored for such projects, and I got the experience for it after working on Faeria. I would say that the main different is that most other games has some concept artwork as well. I contribute in creating the character in the card, but in Teppen its very strict.

You have drawn cover art for Dungeons & Dragons A Darkened Wish, G.I. Joe: Sierra Muerte and the crossover Power Rangers / Teenage Mutant Ninja Turtles comic books. Did you ever dream of working on such renowned series?

Honestly I never thought I would work on such IPs, I really liked TMNT as a kid and it was such a pleasure working on an official artwork for the series.

From all your original creations, "The White Witch" and "Skating Giants" catch one's eye. What plans do you have for these two IPs? 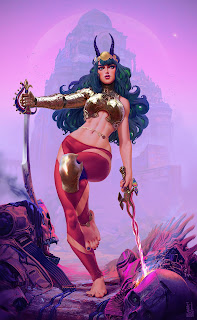 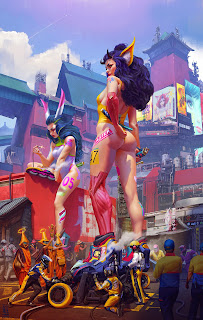 I am working on the story for both universes, and the plan is to create a comic for the White Witch and maybe a pitch for the SG. But I will keep creating artworks for both of them along the way.

Your rendition of Melina from Elden Ring is quite impressive. Did you play the game? What do you think of the art direction? 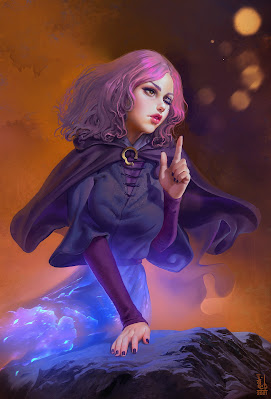 Thanks! I didn’t play the game but I did watch most of it on twitch. I loved the game and I hope one day I get the time to try it. I just like the Souls concepts and characters, always a pleasure to do fan art for them.

What advice would you give to aspiring artists?

Don’t skip the fundamentals, sadly there is no shortcut. At the end it is all about the grind, so you need to paint and draw a lot to get to the level needed in the industry. Oh and try to think of the future job you want and tailor your portfolio toward that.

What can people expect from you in the future? What projects are you working on right now?

There are always new projects but as usual, all under NDA. As for now, I am trying to finish all the unfinished artworks I have in my folder, trying to make it the year where no wip is left behind.

To close the interview, do you have a message for Mega Man fans that you'd like to share?

First, thanks for the interview. And I would like to thank the Mega Man community for appreciating the work I did for Teppen. And I am always looking forward to do more Mega Man illustrations given the chance.

You can support Ibrahem on Patreon, check his work on ArtStation and follow him on social media.

Bellow you can see a gallery of all Mega Man X Cards made by Ibrahem for Teppen. 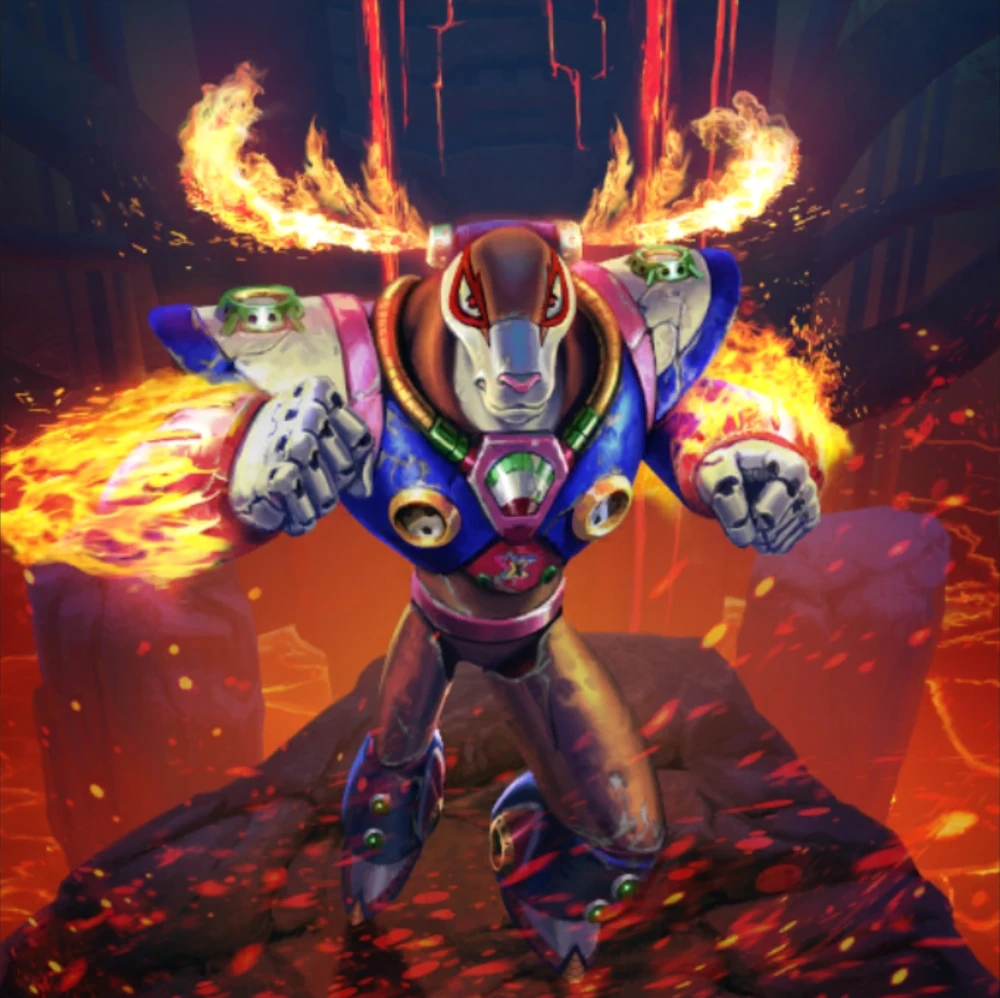 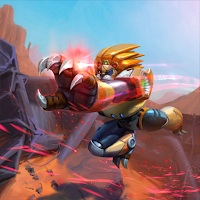 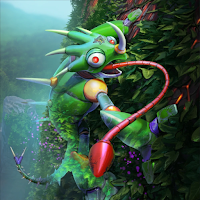