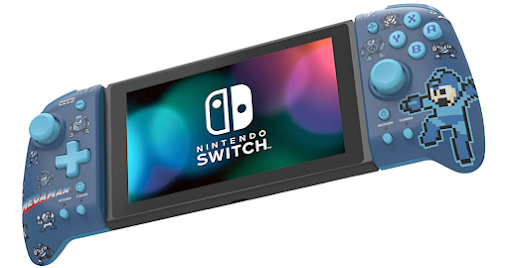 Right outta left field, HORI has unveiled an officially-licensed, classic Mega Man-themed Split Pad Pro controller for Nintendo Switch. It's already up for pre-order at Amazon for $59.99. It's slated to ship on December 17th, 2021 (just in time for Mega Man's 34th anniversary).

Much like HORI's previous Split Pad Pro controllers, the Mega Man model features full-sized analog sticks, a precision D-pad and extra large shoulder buttons. Advanced features include assignable rear triggers and a Turbo button. It even works with the Nintendo Switch OLED Model! Do note, however, it does not include HD Rumble, NFC, an IR camera or gyro functionality.

Not much else to say than that! Hop on over to Amazon and snag a pre-order.

Posted by Protodude at 4:10 PM