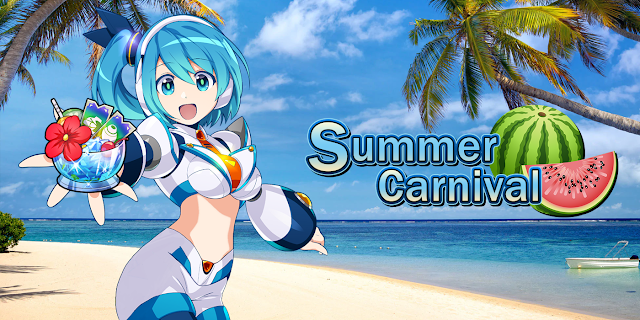 Summer has arrived in Rockman X DiVE. With one week to finish the Mega Man Zero Series event, the development team are introducing another big event: the Summer Carnival. It starts low-key but promises to heat up in August. You can find all the details about this week's content and a little something more after the break!

Starting today and until August 20 at 15:59 (UTC+8) players can use this banner for free once a day. On top of whatever result you get from the gacha, you will get a Vigor Coin. Players will be able to obtain a total of 36 Vigor Coins from the banner before it expires. Alternatively, you can draw from the banner one extra time a day for 30 paid EM which also yields another Vigor Coin.

On top of the Jakob Orbital Elevator Challenge I , levels 31 to 35 have been unlocked for normal and hard difficulty. Additionally, new rewards can be claimed when you beat level 33 and 35 in the current event tab.

The Savior Has Come has new missions and milestones to unlock. It's the usual stuff they have been doing. Beat the stage in all difficulties, finish co-op three times, do research three times, beat Story one time and  accumulate 500 and 2500 coupons.

Furthermore, this update has fixed some bugs and adjusted the following things:

Note: You need to update the App to 1.4.1 to get this adjustments and bug fixes."

Earlier today when the new content notes were published on the Official Site, the development team made a mistake and listed Awakened Zero as one of the memories available to purchase from the store. Later it was change to just Zero, but this was not a typo: Awakened Zero is coming to the game very soon.

So that's all for this week! Next week promises to be an interesting one with the third DiVE Festival. We will be here to report about it!
Posted by Reploid21XX at 10:10 PM