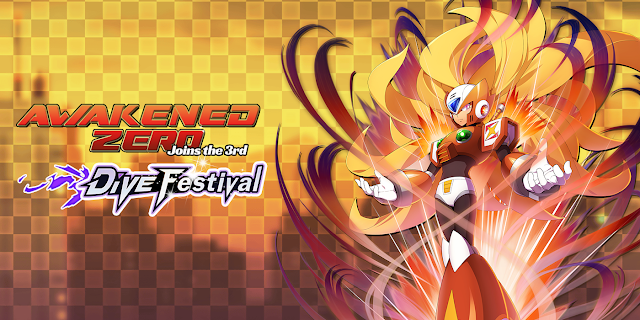 Unintentionally revealed by the development team a week ago, Awakened Zero arrives today to Rockman X DiVE as the highlight of the third DiVE Festival. You can find his trailer, skills information and this week's content rundown after the break!

Launch two gigantic energy blades, dealing 148.75% damage to all enemies in its path.

The third DiVE Festival and the chance to get Awakened Zero will last from today until July 30 at 15:59 (UTC+8).

As a special offer during the Fesival, the following items have been added to the store:

Starting today and running in parallel, we have the "Weapon Development Challenge" and the "Challenge Token Roulette" which are available from the current event tab. This will last until August 6 at 15:59 (UTC+8).

The "Weapon Development Challenge" consist in a series of milestones the player has to reach in order to get tokens to spend in the roulette. The milestones encompasses five weapon: Assault Equipment, Electric Current Spray Gun, Gatling Gun, Bean Rapier and Mega Buster.

By reaching milestones like "complete any stage 10 times", "complete 10 arena matches" or "upgrade 20 times" you will get abundant tokens plus you will get more by reaching certain level in the weapon gallery. Furthermore, you can get 3 free tokens every day too. 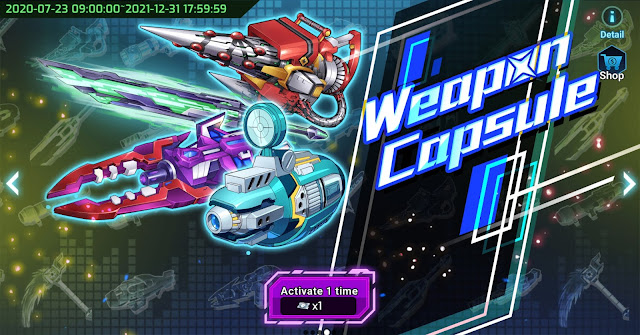 Now when it comes to the roulette, it works as it did in the past. The only difference, though, is that they have replaced the EM with "Weapon Draw Tickets" which can be used in a special banner to draw weapons.

The second Boss Rush round is here and will last until next Wednesday at 16:00 (UTC+8). Not much to say here but as you can see in the image above, the bosses this time are Overdrive Ostrich, REX-2000 and Bit.

By completing Boss Rush in the shortest time possible you will get more points that later you can exchange for rewards of which the more important are 130 EM and 15 memories of the Doom Blade.

As part of the Summer Carnival event if you score 10000, 15000 and 20000 points you will receive a total of 25 Doom Blade memories before August 7 in your in-game mail. This will allow you to craft the blade in case you don't have it already.

As it did before Boss Rush also has an online ranking where you will be competing against other players to finish the highest possible to get more rewards.

And that's all for this week. Next week promises to be interesting as is pretty much two days away from August when the next content update arrives to the game. Will the gang join Chill Penguin in the beach? We will find out soon!
Posted by Reploid21XX at 7:47 PM