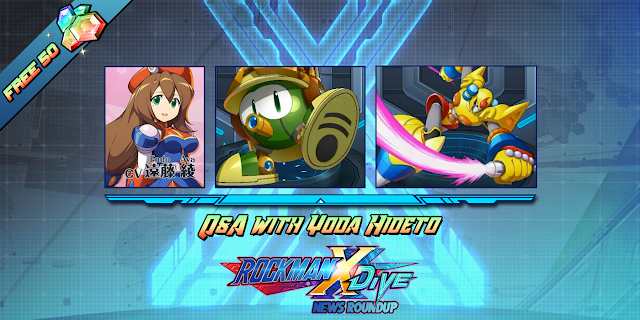 A couple of days ago we got a peek at Zero from the Zero Series in Rockman X DiVE. And today we have a plethora of news plus some free goodies! Check out all the info after the break!

When Iris was introduced in Rockman X DiVE back on June 11, she didn't have a voice due to COVID-19 affecting the development of the game. Today the development team announced that she will be voiced by popular voice actress Aya Endō. Her voice will be added to the game this Thursday.


Via the episode 0 of "Grown-ups' Toy Box" we have some new revelations:

In the video above, host Shinn had an informal Q&A session with Rockman X DiVE producer Yoda Hideto and Twoyun, RiCO's cosplayer. Thanks to our friend Sonny, we can provide you with a translation:

SHINN: There's a lot I want to ask, including characters. Who will make their debut in X DiVE? Here's some of the ones I wanted: How about Rockman DASH (Mega Man Legends)?

Yoda: Rockman DASH is a rather old series but still holds up in popularity even to this day.

Yoda: As long as they are connected to the Rockman Series, they might make their appearance here.

SHINN: But if Rockman.EXE is joining, then what about Netto Hikari (Lan Hikari)? How would he make his appearance?

Yoda: Netto-kun ah... he's a human though... but that doesn't mean he can't appear in this game.

SHINN: Ah... so it's still possible.  Perhaps when Rockman.EXE is using Program Advance, we can have him shouting Sword, Wide Sword and Long Sword. Life Sword?

Yoda: You know a lot!

SHINN: Something along these lines...right?

Yoda: Right. No matter if they are male or female characters, human or Reploid, they might get their appearance in this game.

SHINN: Like the characters from Zero series that just got confirmed... How about the original X?

Yoda: Then stay tuned for more!

SHINN: Now last question for characters... This questions might be a bit... I'm not certain whether the audience knows... but if you are a fan of X, you should know this character: Awakened X.

SHINN: The one that uses his hand to grab Sigma's face...(plays the video of "Day of Sigma") ...is that possible?

Yoda: Like we just mentioned: characters we never got the chance to play as, even bosses that are used as chips only in the past... expect them to appear here.

RiCO: I have a question for the producer. How do you define character ranks? Cause in the story, Zero is a SA rank hunter while X is a B rank hunter. How do you classify them into different ranks?

Yoda: Right. Like the original story, there are A rank and S rank Maverick Hunters. But in X DiVE, the ranks are completely different.

I believe you can feel how strong S rank characters are. But then there's also Axl, he's really strong although he is a B rank character.

The only difference being the difficulty in obtaining them. Like you can get B rank characters easier.

We hope everyone would collect more characters and enjoy them regardless of which rank they are in.

SHINN: Now another question... let me ask can we make Twoyun (Cosplayer for RiCO) available for everyone?

SHINN: My bad. I meant would RiCO be a playable character?

Yoda: Actually we received a lot of feedback regarding... about how annoying RiCO can get...

Yoda: How about SHINN's thoughts about her? Representing the whole player base.

SHINN: On behalf of the player base: A lot better than X5 Alia.

Yoda: This is to allow newcomers to receive helpful information as much as possible.

SHINN: I wonder if the comment section will get flooded with "SHUT UP".

Yoda: If we are able to cheer for her, I'm sure RiCO will be pretty happy about it.

Yoda: As for this question: anything can come true as long as they are possible.

SHINN: A lot of players are spamming for whoever they wanted to play as. And who they wanted in this game. I heard Yoda-san you have a say in this? Like who gets to be in X DiVE or not.

SHINN: Now then comment your favorite character. Spam it in the comment section! And opinions about the game too, please comment. The officials will read them.

RiCO: Tell the officials your thoughts about the game.

Yoda: I'll read them after I receive translations.

SHINN: Or you could private message me, I'll tell him directly.

RiCO: This isn't asking for more! This is for everyone's welfare!

Yoda: Alright. Now that RiCO asked for it. For those who are watching. We have a present for everyone.

SHINN: This time being the most helpful!

RiCO: So we're having this special redeeming code here.

As you can guess from the chat above, we got a redeemable code for some free resources in the game, including 50 EM.

Use this code, JKVUSVJECV, on the Rockman X DiVE Official Site before it expires this Thursday at 21:59:59 (UTC+ 8).

That's all for today but we will have more Rockman X DiVE news tomorrow... or the day after tomorrow as we approach Z-day!