Sigma. More Than the ‘Sum’ of His Parts? 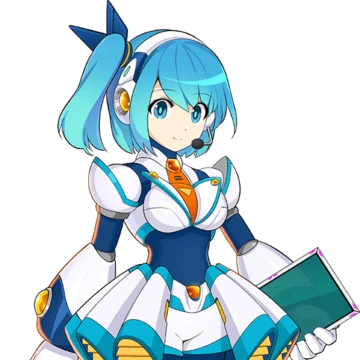 It’s the Fourth of July everyone! Happy Day of Σ!

Wait. That was yesterday? Oh... Hope you all had a great time lighting fireworks in the name of Reploid independence!

Now that Sigma is finally in Rockman X DiVE, some of you may be wanting to know about the enigmatic Maverick leader. Who was he before he rebelled against humanity? Well...


Sigma and the Origin of Reploids Sigma gained renown as the Commander of the 17th Unit of Maverick Hunters[1][2] (the 17th Elite) to which X and Zero also belonged.[2] He is Dr. Cain’s masterpiece[2]: a Special A Class Hunter once called “the strongest in history” for his overpowering combat abilities, intelligence and fighting power.[1][2]

However, some say Sigma is also the very first Reploid created by Dr. Cain. Yet, when he was introduced to us in ‘The Journal of Dr. Cain’[3] he was stated to have “the highest intelligence” and “the latest circuit designs”. Surely he cannot be the very first, right?

Ian Flynn -- head writer of Archie’s ‘Mega Man’ -- certainly seemed to think so. During the 'Dawn of X’ storyline a very different character than Sigma is depicted as the first Reploid[4], because “the very first attempt at copying X, with known shortcomings, cannot logically be one of the end-all, be-all super reploids.”[5]

Similarly, the novelization (‘Irregulars Report’) introduced the character of ‘Alpha’ to fulfill the first Reploid role.[6] As his debut work, Cain had been “constantly updating” Alpha and putting him “center stage”.[7] Even so, with the creation of Cain’s masterpiece Reploid, a jealous resentment began to grow in his heart.[8] Alpha was unable to keep up with progress. 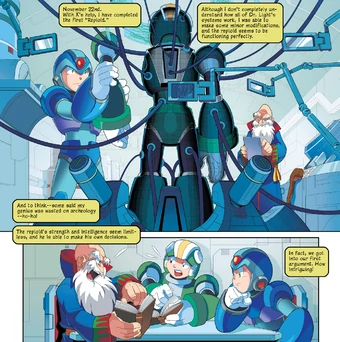 Where then did this idea come from? It seems like it started cropping up when Capcom Production Studio 3 took reigns of the series. In the ‘Rockman X Cyber Mission Complete Strategy Guide’ it is written: “Sigma whom Dr. Cain created is the No.1 Reploid”.[9] And the idea has seemingly persisted to this day, as shown in ‘Marvel vs Capcom: Infinite’. “Sigma was the first and most powerful Reploid created by reverse-engineering X.”[10]

Such statements by themselves have proven to be rather inconclusive, though. While “No.1” (第1号)[9] can definitely be read as first, depending on the context, it can also be interpreted as best and greatest, matching Sigma’s usual description. Likewise, the quote from ‘Infinite’ is better translated to: “Sigma is the strongest repliroid that was created for the first time after the analysis of X.”[10] This leaves us none the wiser.

Still, that’s not all we have to go on!

The ‘Rockman X6 Complete Strategy Guide’ paints a picture with more definitive context, courtesy of Hunter Commander Signas narrating “The Birth of Reploids” to us as part of the “History of X”[11]:


“Based on X excavated from ancient ruins, Dr. Cain succeeds in developing robots with emotions, the Reploids. The first one (第1号) is X's greatest enemy, Sigma.”[12]

“Using the data from the blue robot called X as his base, Dr. Cain manufactures Sigma. A robot born with the highest abilities, without comparison from all prior robots. The general term for that robot became known as "Reploid”.”[13]

These two quotes appear to reference an earlier entry in The Journal of Dr. Cain[14], wherein the first Reploid is described as having “unlimited strength and intelligence”. A very Sigma-like description. Perhaps this idea of Sigma being first has some merit, after all? If only different developers could come to a consensus... The detail is curiously omitted from Inti’s version of events, for example.[15]

So, what do you all think? Was Sigma truly the first Reploid, or is that just a misinterpretation? If he indeed first, then how did he manage to maintain his status as the strongest? Was he -- like Alpha -- constantly upgraded over time, or did Cain just never make a Reploid better than his first? Would this lack of progress affect Sigma’s ‘philosophy of evolution’ in any way?


[1]
Sigma was at one time the Commander of the Irregular Hunter 17th Unit. A Special A Class Hunter, he was called the strongest in history due to his overpowering combat abilities, and gained the confidence and respect of his fellow repliroids. However, on a certain day, he suffered a defeat in battle by an unidentified unknown red irregular (Zero) that tore at his proud ego. At that time he was infected by some manner of virus that facilitates irregularity, germinating wickedness in his heart. Several months later, Sigma was completely enslaved by the evil virus, and used his overwhelming strength and genius intellect to subdue many repliroids into joining him in a revolt against humanity.
かつてはイレギュラーハンター第１７部隊の隊長であったシグマ。その圧倒的な戦闘能力は史上最強といわれ、特A級ハンターとして仲間に尊敬され、信頼されていたレプリロイドである。だが、ある日、正体不明の赤いイレギュラー（ゼロ）との戦いにおいて敗北を喫し、最強と自負するプライドがズタズタにされた。このときにゼロからイレギュラー化を促進するウイルスに感染し、邪悪な心が芽生えてしまう。数ヶ月後、完全に邪悪なウイルスの虜となったシグマは、その圧倒的な力と天才的な頭脳で大勢のレプリロイドを従え、人間に対して反乱を起こしたのであった。
- Rockman X4 X to Z Kouryaku File
(translated by marshmallow man)

[2]
Sigma
The commanding officer of the 17th special forces of which X and Zero belong, called Dr. Smith's masterpiece, his intelligence and fighting power are the greatest of all Repliroids in history. He is the leader of the evil plan to kill off the human race.
Capcom Sound Series Rockman X1
(translated by FireMan)

[3]
February 16th
The council has now decided to set up a group of "Hunters" to destroy any maverick before it can cause injury. The reploid named Sigma has assigned to lead the Hunters. Sigma is one of the most intelligent reploids I've created and contains my latest circuit designs. His systems should be immune to any problems."
11/20
At last the council has settled on a countermeasure.
They’ve decided to establish a “Hunter” group, and destroy Repliroids that have gone Irregular before they can inflict harm on a human.
A Repliroid called Sigma has been appointed as the leader of the Hunters.
Sigma is a Repliroid of the highest intelligence, with the latest circuit designs.
Sigma has the talent to cope with any problem.
- Mega Man X / Rockman X
(translated by Rockman Elysium)

[5]
Ian Flynn: Part of it is Sigma coming after X, as folks have already pointed out. The underlying "flaw" of the entire reploid line is that Cain couldn't perfectly replicate Dr. Light's work on X. The very first attempt at copying X, with known shortcomings, cannot logically be one of the end-all, be-all super reploids.

Secondly, Sigma was built to be the ultimate answer to the Maverick issue. He was built to be smart enough and powerful enough to lead the Hunters and defeat anything that went Maverick. How could he built to do all that before there were reploids/Mavericks/Hunters?
https://web.archive.org/web/20160208231941/https://bumbleking.com/forum/viewtopic.php?f=6&t=7335&sid=b8d2ac013cdf2e1b9cf651365d2d1a3b&start=30

[6]
I was able to supplement the “black box” thinking program of X with something I developed on my own, and finally developed the very 1st of the new age thinking robots, to then showcase it to the whole world. I named him “Alpha”, based on how X meant the unknown number. “Alpha” had a “human-likeness” beyond that of what I’d expected, and overwhelmed people across the world, and the replicant thinking robots which imitate humans, usually called “Reploids”, were accepted as partners of a new age, and this day marked the beginning of competitions between scientists across the world to develop Reploids.
http://www.rockman-corner.com/2020/02/the-entire-rockman-x-novel-is-now.html
- Rockman X The Novel Irregulars Report
(translated by Sidier)

[7]
Alpha is my debut work so I’ve been constantly updating him while making him be the center stage
http://www.rockman-corner.com/2020/02/the-entire-rockman-x-novel-is-now.html
- Rockman X The Novel Irregulars Report
(translated by Sidier)

[8]
“Well then, why!? Why did you say that Sigma was your masterpiece!?”
“While it’s true that Sigma is a masterpiece, there’s no superiority or inferiority between you and him!”
“Don’t lie! Who’d believe such words!?”
http://www.rockman-corner.com/2020/02/the-entire-rockman-x-novel-is-now.html
- Rockman X The Novel Irregulars Report
(translated by Sidier)

[9]
If you exclude X and Zero as Repliroids, Sigma whom Dr. Cain created is the No.1 Repliroid.
He was called the strongest in history and was the captain of the 17th Unit of Irregular Hunters
エックス、ゼロをレプリロイドに含めないとすると、ケイン博士が作ったシグマがレブリロイド第1号となる。史上最強とまで呼ばれイレギュラーハンター第17部隊の隊長あった彼人
- Rockman X Cyber Mission Kanzen Kouryaku Guide

[11]
Signas: Let me show you the various data I have prepared. I would like you to know the history and various things up to 21XX
シグナス: 私の用意したさまざまなデータをお見せしよう。21XX年までの歴史や諸事などを知っていただきたい
- Rockman X6 Kanzen Kouryaku Guide

[13]
Sigma completed
Birth of Repliroids
Using the data from the blue robot called X as his base, Dr. Cain manufactures Sigma. A robot born with the highest abilities, without comparison from all prior robots. The general term for that robot became known as "Repliroid."
シグマ完成
レプリロイド誕生
エックスと呼ばれた青いロボットのデータをもとに、ケイン博士がシグマを製作。今までのロボットとは比較にならない高性能のロボットが誕生した。そのロボットの総称は「レプリロイド」とされた。
- Rockman X6 Kanzen Kouryaku Guide

[14]
November 22nd
With X's help I have completed my first "Reploid." Although I don't completely understand how all of Dr. Light's systems works, I was able to make some minor modifications and the reploid seems to be functioning perfectly. His strength and intelligence seem limitless and he is fully able to make his own decisions. In fact, we got into our first argument. How intriguing!
11/22
With Rockman X as a reference, I’ve completed the first robot “Repliroid.”
It doesn’t mean I completely understand how the system Dr. Light built operates.
I tried making a few small revisions to the system.
Thereupon, the Repliroid became fully functional.
The Repliroid has unlimited strength and intelligence, and seems fully able to make decisions.
The Repliroid can even debate.
I actually debated it.
What a splendid robot it is.
- Mega Man X / Rockman X
(translated by Rockman Elysium)

[15]
1XX years ago
The birth of Reploids
Dr. Cain carried out his research of X, and using this created highly advanced robots called "Reploids."
http://www.themmnetwork.com/blog/2010/04/09/does-the-rockman-zero-collection-storyline-explain-everything
Posted by Protodude at 3:19 PM