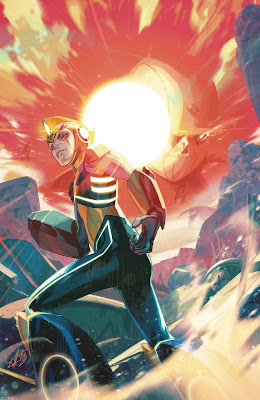 As we await the launch of Boom Studios' brand-new Mega Man Fully Charged limited series in a couple weeks, issue #3's covert art has arrived to tide us over.

The character featured in the center is Namagem -- the twin "brother" of Mega Man/Aki Light. (his name is 'Mega Man' spelled backwards. Yeah.) Namagem is depicted standing amidst a pile of broken and tattered robotic bodies with, what appears to be, Skull Man looming in the background. Note that Skull Man did not appear in the Fully Charged animated series.

Pending this issue's solicitation, it remains to be seen if the cover represents an event taking place during the "Hard Wars" or after the events of the show's final episode "The Gauntlet Part II." One thing is certain, though: this series will be tonally darker than the animated series.