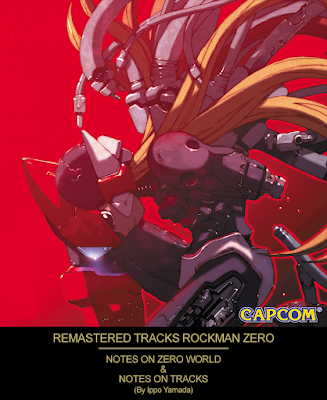 Continuing our Remastered Tracks translation project, today we bring you a complete translation of  Remastered Tracks Rockman Zero's booklet. This is the first music CD Inti Creates published under their record label and was originally released on January 23, 2004. Typical of Inti's albums, there's a mix of remastered music and drama tracks here. However, as opposed to future releases, this album only contains one disc.

It’s a future in which humans and the autonomous thought model robots “Repliroids” coexist. But when the “Irregulars”, Repliroids that functioned abnormally, suddenly changed and began a rebellion against the humans, the world’s gears began to creak.

The revolt turned into a war. The calamity kept on spreading. The world was devastated. One hero ended the conflict that’d be posteriorly named “Irregular Wars”: the blue Repliroid, “X”.

The war, which was thought that’d go on forever, finally came to an end, and the world began to rebuild. It’s now a peaceful world with no more “Irregulars”. The humans seek a Utopia in which they can live happily and build the city of “Neo Arcadia” as the base of operations from which to execute the (world’s) regeneration. A world of humans for the sake of humans. It looked like the could regain their smiles.

But that was Hell for the Repliroids. Under the pretext of “avoiding a repeat of the calamity of the Irregular Wars”, little issues and paranoia turn into false accusations of being “Irregular”, and many innocent Repliroids are arrested and executed while being stigmatized.

Those that escaped persecution fled Neo Arcadia and lived in hiding in old, partially destroyed cities. Using what few energy was left, and live on day after day in an assorted way. But Neo Arcadia’s pursuit doesn’t stop and drives them into a wall to then hunt them down.

Despite being a human, the girl “Ciel” sides with them and they decide to fight so as to survive. They form the “Resistance” and began small resistance efforts against Neo Arcadia. But those were mere thin hatchets of a mantis. They were driven to a wall and were on the verge of their destruction… They entrusted their only hope to fate, and headed to some “ruins”.

A forgotten, sealed place. Where… the legend slept in…

(Note: Drama tracks don't have liner notes in this booklet).

As the multiple lines close on each other, the heartbeat sounds increase: that’s when the logo is inserted. A single based on the “Theme of Zero” and Zero’s (Kazama Yuutou) title call ring out. A title back that makes one remember the X Series, indeed.

Track 3: The ruins of lab

The track of the ruins, with sad piano phrases within it. This is a sealing facility made with the goal of researching the Sigma Virus and to totally quarantine Zero. Its existence has been erased from history by Neo Arcadia, so it’s indeed a “forgotten lab”. Only the remains of history linger here by now…

The theme of the sealed Zero, using “Area of Zero” as a motif. The Irregular Wars, the blue hero and Neo Arcadia’s secrets. Something sealed alongside the legend is about to be unleashed, too. Zero with (the wires) linked to him was impressive.

“Cyber Elf” is the naming for the energy bodies that have a mysterious power in them. Seeing how X has become a Cyber Elf, they do seem to have a very close relationship with Repliroids. It’d seem that naming all of them was very hard, indeed. One last thing: don’t forget about Passy.

At the same time the seal of Zero, the “new brand” of the X Series, bringing back this track was a natural success. I think it’s a must-have song in the linkage from X to Zero. I did tag up with gramps Tomozawa (Makoto) again after a long time. Kurihara’s guitar riff in this track is amazing. Yes, amazing!

AKA Boss corridor track. Some high-classed Repliroids in Neo Arcadia are named “Mythos Repliroids”, and by imitating ancient deities, they deify themselves and tried to hold into their glory. The space between the doors is where mental concentration must be done before facing these foes.

I always think that battle tracks in games, whether they’re short or long, should be things that leave an impression. Especially in the Rockman games, where a battle might be over in an instant or drag on forever… It’s a hard issue. When the opening demo storyboards were completed, I made this song for the scenes of Ciel and company fleeing from the Neo Arcadian pursuers. It’s another pillar of the Rockman Zero music that would be reused later.

A single track for the results screen once you end a mission. I remember that I hurriedly added this in when development was in its late stages, since I didn’t remember there was going to be such a sub-screen. I did think it was a bit better when I was making it, To be honest, though, now it feels clockwork-like… This (the result screen) is where the point of playing action games shows up.

Zero’s activities increase the living areas which you can go and come back from freely, and those areas will use this track. The Resistance Base had been an underground energy generation facility from the previous century, and by going through the adjacent and newly built tunnels, it links to an underground transportation network as well as a common groove, and a network for logistics and info is built… A harsh but active lifestyle can be found there.

The theme of the Resistance. The fall of the giant colony Eurasia caused this nameless city to become a ruin. The continuously raining acid rain wetting the piled up rubble and the damaged high-rise buildings make up the location where the Repliroids that ran away from Neo Arcadia fight to protect their tomorrow. It’s the first stage track that I made, and it was used for all stages in the early phase of development.

The stage where you progress through the dark underground transportation network. When the Nightmare Phenomenon happened, some humans and Repliroids used this maze-like underground facility as a first place to live underground. The railways and sewers spread deep beneath the earth, as if symbolizing the glory of the past, contain sleeping memories of human and Repliroids were searching for new ways to coexist in this underground space.

The track of the fierce and furious army advance. Fefnir’s “Scorched Earth Operation” in the desert, Hittaid Hottaid’s “Resistance Base Attack” and the brain express Pantheon Core… It’s used for fierce battles. At first it was only a loop of the first half but I was told to make it longer because of the demo scenes, so I supplemented it with a brass phrase thus turning it into a longer song.

The scorching desert. The hazy mirages. A desert region born as a result of the “Scorched Earth Operation”. Neo Arcadia doesn’t wage a simple war of annihilation, as another facet of their total control over the Earth’s environment, they drive the opposing forces to wall through the use of desertification through long-term drought and soil erosion. This remote region has unregistered Repliroids such as Anubis living on it.

A track which has a mechanical and industrial image to it. A forcefully closed Energen Crystals mining facility as well as a Repliroid production plant. Tons of stocked up Energen Crystals as well as the refinery facility, Repliroid medical devices… It was revived by the Resistance as an important lifepoint yet…

The infiltration mission track, which has an image of a tight tension to it. The old research facility built by the Repliforce Navy, destroyed during the Irregular Wars, was built for marine geology research such as volcanic eruptions predictions or maritime development, has become a natural Neo Arcadia fortress. Once you come out of the cave, there’s an abyssal lake… The place Fairy General Leviathan is in charge of.

The scene when the Neo Arcadia intelligence organization, the Cutting Shadow Army, led by Hanumachine, finally are able to intrude the Resistance Base. Actually, though, the one who’s directly ordered the attack on the base is Leviathan, who seeks to retrieve the “lost data”, and Hanumachine is placed under her command while also carrying out his secret orders to assassinate Zero… That’s the back setting. Something that’s hard to convey in a portable (game console) game.

The story is at its climax. The “tower” linking the Utopia “Sanctuary” and the control room “Area X”. This is where the climactic death match takes place. The “Sanctuary” is shaped after an ancient temple and dotted with defense facilities. It’s protected by elite “Holy Warriors”. The “Tower” is a lost legacy linking the surface and satellite orbit, and that technology is the motivation behind its glory. But now, with all its anti-intruder systems spread within it, baring its fangs at Zero, it’s indeed a tower of death.

The track of the castle where X is waiting, using the “Theme of X” as motif.  It’s one of Neo Arcadia’s unmanned space facilities built in geostationary orbit with the “Area X” control room at its center, and the administration is commanded from here. The main module is a forbidden test ground for Repliroid resurrection.

The legendary blue Repliroid that rules over Neo Arcadia, as the symbol of “infinite possibilities” and “the one who does the right things”. He kept on fighting in the Irregular Wars while worried about how he had to destroy fellow Repliroids for the sake of peace. And now that the world is at peace again, he keeps on existing as the leader of Neo Arcadia. But all of it, the idea peace as well, were but a pretense.

Zero, after his last fierce battle, and injured, ended up in the wild lands. He, who heard Cyber Elf X’s voice, plunges himself into the wild lands of battle once again. How sad… There originally was an event in which (Zero) would mow down the Pantheons that attacked one after the other so I made it to be pretty long but in the actual game it lasted very briefly. Truly sad, indeed… Enjoy the true pinnacle of this Umegaki arrange, emotively sublimated.

The first theme in this situation, the inheritor of the X series, “Zero”, a totally different series which has just begun, was “From X to Zero, the Area of Zero”. I remember that the start it was going to be a harder setting and the Zero-original parts would decade into a dark, heavy feeling. This is a song that markedly preserves that taste.