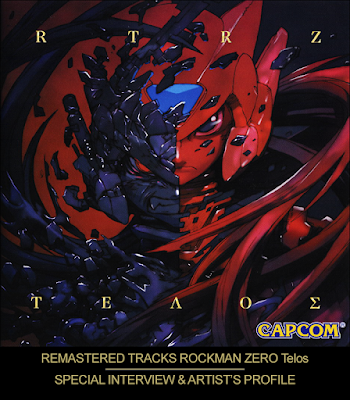 To end our coverage of the REMASTERED TRACKS ROCKMAN ZERO Telos soundtrack booklet, we have an interview with Katabuchi Sunao, the director of the 2nd and 3rd Rockman Zero TV commercials that aired in Japan. What's more, we also have profiles of perhaps, the notable members of Inti Creates Sound Team that worked on the soundtrack.

Read on for all the info and images! Thanks again to Sidier for providing all this translations!

Game Experience Comes From Your Works

Did you know about “Rockman”?

Katabuchi (Zero series commercials director): I knew about the games but I myself don’t play games often. A classmate of high school made a game named “Block Crumbling”

Katabuchi: Rather than a PC, I think it’s something far more primitive, inside of a bent aluminium box

So it’s his own work, then (laughs)

Katabuchi: That’s right. That was the age it was. I didn’t play it much, though

Don’t you play games during breaks of the job?

Katabuchi: Well… Tetris… (laughs)... And I also often played Mahjong games. I was told that playing it alone was not correct and that you can’t take out the part of the battle between the players (laughs)

Katabuchi: For the commercial of the first game… The game itself hadn’t released yet so it didn’t have a physical form per se. We couldn’t use it as reference, So we kinda improvised along the way. The basic illustrations were very cool, and the ones they gave us were… (searches for it) This up-close picture so we used it as it was. We did do so, yes. There were highlights in the forehead and we put them in as they were. To recreate the illustrations.

(Not bringing up the anime settings) Did you use the game settings as source materials?

Katabuchi: Those guns the Panteons carry are odd, no? Isn’t that Zero’s weapon? I didn’t want the foes to have guns but facts are facts and changing the design policy would’ve been odd. So I did think that the gun was Zero’s but… It was brought out while fit in and so that’s how it turned out like.

Is there some backstage tale about the CMs?

Katabuchi: They often say that animation is often done with 3-panels keyframes or 2-panels keyframes but the Zero CMs… Most of their content is made of 1-panel keyframes. 15 seconds = 1 cut but less than 1 second approximately yet it takes a lot of sheets and it’s like the amount of work was multiplied.

There’s many cuts and things happen in a way that shower people with questions, no?

Katabuchi: Yes, there’s a lot. Truth is that, recently, I’ve been using long takes. And, somewhat, I don’t grow bored of that. Feels like that this is actually fun… I pour a lot of feelings into it. Even though it’s but a mere 15 seconds, it actually has a lot of stuff (eye catches, etc) and I wanted to make it feel like you’re seeing a movie in those 10 seconds (due to the short cut splits). Guess you can call it a movie teaser. I tried to give the impression it’d been cut off a “Rockman Zero” movie. Teasers take cuts from the movie itself so they tend to be shorter than the actual scenes. As if we there was such a thing. There’s not, though. But I did it nevertheless (laughs)

That did really come across

Katabuchi: I was actually thinking of making it movie size or 16:9.

What kind of image did you have when making the 3rd CM?

Katabuchi: When the planning has been established I went on to make something definitive; the idea was to focus on that goal. I was told that Zero is about to overcome a huge crisis; I’d been doing the CMs as teasers but this time around we wanted a climax of sorts. To pour out the drama itself.

What do you think of the series’ world?

Katabuchi: Zero feels like a dramatic hero so I wanted to emphasize that image. I’d heard he was a protagonist with a very serious background. So we headed there in a straight line.

What kind of image do you have of Ciel?

Katabuchi: At first I didn’t know anything so… But nevertheless she did feel like she was Zero’s protector. Someone who’s always keeping care of Zero. Always looking (laughs). The advertising agency had made some story materials for the presentations but she didn’t appear in the 3rd CM. I didn’t mind and we had to show the enemy so… After beating around I said to leave her asides (laughs). She’s looking out for him (laughs) 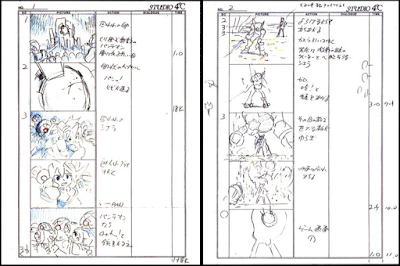 Katabuchi: The 1st CM was about Zero being born from being locked somewhere. And in the 2nd CM his colors changed (laughs). In the 3rd CM he was in trouble and very damaged and stands out while spitting. At first this was all there was to them. I did feel “and what will come out of these” but Capcom’s Mr. Inafune told me “there needs to be something that falls down” and so the idea of the 3rd CM was pretty much set in stone.

Katabuchi: I was wondering which (Boss) to use but I did think that the “Elephant” would be more impactful

This huge amount of enemies is hard to express in the game so when I saw the CM I was like “whoa, I can’t beat these many” and the “elephant” did really impress me.

Katabuchi: True. If you want to think of it like that… I feel like I’ve done something uncalled for (laughs) I do feel like Capcom let us plenty of freedom as to how to do things… I feel that it originally was selling elements and we only had to exaggerate them. It was a CM in which both parties had a lot of fun making it. Feeling like the others were happy at how we were working on it.

What about the rumors that you choose the voice of Zero for the 1st CM?

Katabuchi: No, for the 1st CM it was someone else...The director of the CM. They did it. You can call them the CM director, yes… I got that role added when making the 2nd CM (laughs)


The 2nd CM had a lot of variations for the last cut’s background.

Katabuchi: This was very hard to make. Because there was 10 colors! And there’s supposed to be 2 versions of the background, that is. One with waves, another with a blizzard and so on. There were 4 moving ones. We had Sakamoto, the chief of CG. Even when things are already decided and tell him to do the job, he makes a lot of extra stuff (laughs)

His body changing color was due to him powering up, you see.

Katabuchi: That was a big selling point, yes. I think yellow is the color that most stood out. If CMs have to stand out then they’ll need to have a lot of appeal to them.

I’ve heard that you’re very fanatic with the choices of colors.

Katabuchi: This (game settings) illustration has a lot of nice colors to it so I wanted to get a feeling close to it yet but if you draw a lot of things on the surroundings then the colors spread all around the place. Sorry for that (laughs). In normal cases the colors are decided beforehand. But here we had no idea. If it’s red then we go with red… And a red that worked with each cut and each image of Zero.

(In the game’s settings) Flauclaws has no hands though.

Katabuchi: I wanted an scene (of a foe attacking Zero) and I thought that this guy was the cooler one amongst the bosses, so...

After the “elephant” comes the “black panther”. It’s full of claws* (laughs)

Katabuchi: If I don’t have hands then I can’t make a cut featuring the claws (laughs) Capcom did tell me pretty soon about that but the design was already decided and, also, I was told that if I brought up the “secret weapon” then they wouldn’t mind the changes

And that leads to the mouth, I see (laughs) “It was there” and that’s it (laughs)

Katabuchi: On the other hand, I can’t make many changes to Zero. There’s no much I can change so I changed the foe instead

So the boss in the 3rd CM was indeed…

Katabuchi: The combined boss. At first there are fragments of the foe that collapse with Zero. But I must think of something to happen before that. I combined something else to this (to Kelverian) and tried to power-up it further. The sequence was very short though so you normally can’t see the whole picture.

The fans will send panels, so… (laughs) Why did you choose a flower field as location?

Katabuchi: The other 2 CMs were at nighttime and the area was but rocks so… Since I’ve done many other works before I wanted to digitally alter the background. And flower fields need to be drawn from scratch but decided that what we made would work as such

Why did that become a flower garden? (laughs)

Katabuchi: I wanted to create a paradise-like image. Zero is at the edge of his strength so… If he were to die, at least he can do so in a very peaceful place...

We’ve reached a stage that can considered the final episode in terms of the story so now I understand why it was named the climax of the series.

Katabuchi: If that’s really the climax, I wonder how I would do it myself. Maybe ready a scene in which it wouldn’t be odd for Zero to die there and then at any moment... And make him win… That was what I sought to make. Machine-like sceneries already appear in the games so… This time I discarded those entirely and looked as much as I could towards the horizon… (laughs)

How will you be involved in future CMs?

Katabuchi: If I had to make a whole movie I’d need a stable policy on how to compile things, but if it’s these short things then I have a lot of freedom in how to make them. I would get jealous if anyone else gets to do these but that’d be pretty amusing, actually.

Keep on doing interesting things, please (laughs) I will look forward to them as well.

Specialized in animation in the Nihon University of Arts. He met with Director Miyazaki Hayao during his studies, and worked for him as script writer and production assistant. Joins Telecom Animation Film after graduation.

Produces his first work in the year 85, “Onegai! Samia-don!”.

Mushi Productions’ “Who’s that in the front of the rear?”. Screen Design.

After working on other movies’ planning & script, he moves to Studio 4ºC. His main works of this period are:

“Upon The Planet”  Director

Also worked on storyboards and production of others works such as:

Born in Tokyo Prefecture. Debuts in the year 84 at EUROX from Warner Pioneer.

Works in anime songs for anime such as “Panzer World Galient” as well as in CMs for Suntory and Miki House.

Provides songs to many artists like Nakamori Akina, Nyangilas and such.

Born in Tokyo Prefecture. Joined the making of the Drama CD “” while he was studying.

Born in Yokohama City. Began live support of SHAZNA and Kawamoto Makoto and is active as a new-gen guitarist. His guitar songs have charmed many with the emotion poured in them. He’s not only a performer, he also works as a composer.

His main works are Kawasumi Ayako’s “Dream It - I Want to Meet You (Love Candidate (PSX & OVA)) Main Theme”, Tamura Rion’s “It’s Only You and Me”, “Shutokou Battle Series”; and he’s also joined the recordings of Akina (Folder5) and Mitsuishi Kotono.