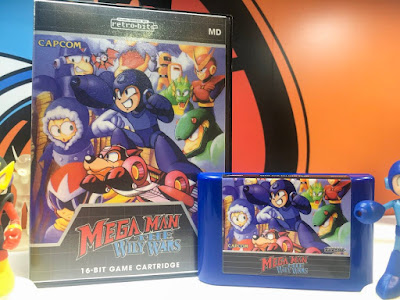 If Mega Man: The Wily Wars' representation in the upcoming Sega Geneis/Mega Drive Mini wasn't enough for ya, an officially-licensed reproduction cartridge by Retro-Bit Gaming was just announced on Twitter. 24-years later, this reproduction marks the very first time the game will be sold in the U.S on a legitimate Sega Gensis cartridge.

"Only physically released in Japan and Europe, we are bringing #MegaMan Wily Wars to North America for both #Genesis & #MegaDrive -- Get ready for a collector's edition that includes many extras! 🌟More details on this release will come soon!#Gamescom2019 #retrogaming #Capcom"


And that's about all there is to share on this subject for now. I wonder what kind of extras will be included? The Mega Man, Elec Man and translucent Quick Man figures cut off in the image above are NEW, by the way. Perhaps they'll be included in the collector's package? We can only speculate. More updates on this front soon!

UPDATE: According to a blurb in Retro Bit's catalog at Gamescom, the cartridge is due out sometime in Q1 2020.