Solicitations for Worlds Collide #8 and #10 (Updated) 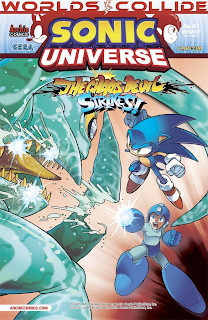 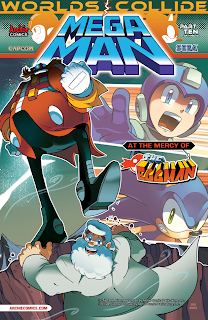 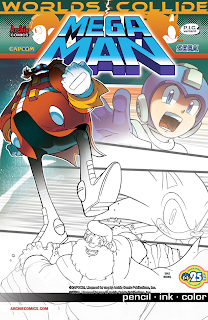 Double dose of solicitations tonight. This time, we're looking at the covers for part eight (Sonic Universe #53) and part ten (Mega Man #27). Hit the jump for the lowdown.

"The hunt for the Roboticized Masters comes to its explosive end! As the gripping second act of the Sonic/Mega Man crossover event comes to a close, Proto Man and the Chaotix make a crucial discovery in the battle to restore BOTH worlds! The tension is fraying the bromance of Drs. Eggman and Wily! Bass and Metal Sonic prepare to lead an army-but an army of what? Featuring new cover art from Sonic/Mega Man art legend Patrick Spaziante, and a special “E.F.F. (aka Evil Friends Forever) Variant” featuring Dr.’s Eggman and Wily gaming on their EGGSbox!" 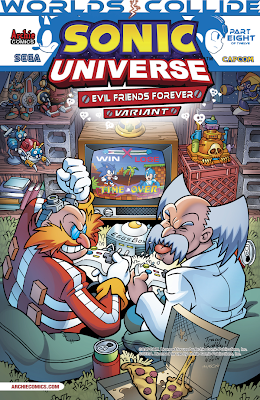 The most anticipated crossover event of 2013 rolls on with "When Worlds Collide" Part Ten of Twelve! We enter the final assault as Sonic, Tails, Mega Man and Rush storm the Wily Egg to end the dastardly duo of doctors' plans! Speaking of "duos," what's that entering Earth's atmosphere? Can it help Sonic and Mega Man fend off the Mega Man Killers? How about a Chaos Devil? Featuring more new cover art from the legendary Patrick "SPAZ" Spaziante and a special look at the cover process with a super special “pencil, ink, color” sketch variant!