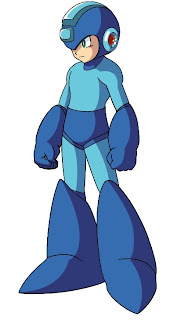 Not too long ago we saw a Rockman Xover screenshot teasing the prospect of playing as the classic Blue Bomber. However, Rockman Unity has reveled the truth the image. That is not a playable Mega Man, but an armor that OVER-1 can equip. It's called "Legend Armor", and it grants the player access to OVER-R, who looks a lot like Mega Man.

Collecting OVER-R's pieces is easy: simply log into Xover. Each day you log in during the campaign period, you'll be handsomely rewarded with a piece of the Legend Armor. OVER-R will be yours in no time at all. You can check out more screens of OVER-R in action at Rockman Unity.

No news on the possibility of other characters showing up as Legend Armors, but I think it's pretty much a given. I can see it now: OVER-X, OVER-Z, etc.

Credit: The Mega Man Network
Posted by Protodude at 3:50 AM