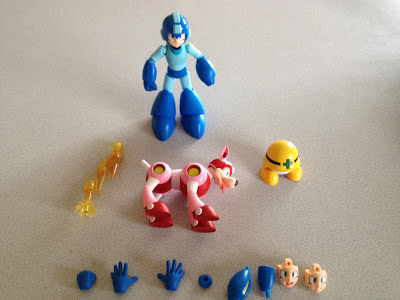 Courtesy of Bluefin and Tamashii Nations, I have acquired my very own D-Arts Mega Man. Now that it's in my possession, I thought I'd try something new: an actual review! Mind, I'm not the best photographer; next time I'll be sure to get someone who knows what they're doing over to my place.

After a succession of Mega Man X figures, Bandai has at last jumped into the classic series, kicking things off with the blue bomber himself. Taking a cue from its successors, D-Arts Mega Man emerges from his packaging with plenty of accessories. He comes with three interchangeable faceplates, two pairs of hands, and a triple-shot blast adapter for his Mega Buster. Bandai has also taken the liberty of including everyone's favorite robo-canine Rush, along with a Met, the series' trademark canon fodder for 25 years.

Right out of the box, the first thing I noticed is just how small Mega Man really is. He clocks in at 105mm (roughly 4.1"). Tiny he may be, Mega Man boasts an impressive degree of articulation. The head is supported by a sturdy ball-joint, a mechanism also found in the shoulders. There's a nice swivel on each elbow, too.

Conversely, we have the shoulders. Because the joints are so small, some finesse is required to pull of some good poses. Apply too much pressure and these guys will pop right out. My advice is to gently wobble the joint into the position you desire. It took a few tries but I eventually pulled of a nice hand-over-buster pose. I also found it a bit tricky trying to keep the triple-shot accessory attached to the buster. If you don't have it pushed in deep enough, it tends to fall out due to weight.

One of my favorite aspects of the figure is the chest and waist, both articulated. These pieces bend and swivel like butter! Perfect ease for posing, especially if you have yourself a decent stand.

Below the waist things get a little shaky. The knees and thighs lack swivel, and the knees could have been better articulated.  Don't get me wrong; they move when you need them to move, but they're nowhere near as flexible as previous D-Arts. On the upside, the feet are very sturdy. The trade off here is a limited range of movement -- two pivots, forward and back. The ankles could use some work (they're just a tad sticky), but otherwise no major qualms there. 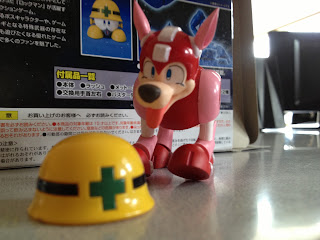 Oh, I have to gloat about Rush. For an accessory, he's amazing. In the package, he looks like a statue. But pop him right out of his plastic prison and you'll find yourself a decently articulated figure. He's got hinged elbow joints with a little room to swivel, ball-jointed head and feet, and a full ranged tail (you might have to break it in a bit). Met is pretty cool, too. Though he doesn't have any articulation, his helmet is removable. Place it anywhere and pretend he's going underground!

Overall, D-Arts Mega Man is a fine figure with a few shortcomings. He looks great and comes with some pretty slick accessories (Rush exceeded my expectations). I think if Mega Man himself were a bit bigger, roughly to scale with Mega Man X, Zero and Vile, most of these joint-related hiccups wouldn't be a problem. But at the end of the day, I definetly recommend picking him up. He'll make a fine addition to anyone's display shelf or desk.

Mega Man is available now for $49.99. The product for this review was provided by Bluefin. Thank you.
Posted by Protodude at 11:01 AM